Everyone has to start somewhere

The trainer theme of this issue reverberates with me personally, so I hope you won’t mind if I climb out from behind my editor’s desk and talk like the pilot I am and always have been. When looking at some of the trainer images, I couldn’t help but reflect on the fact that everyone has a first airplane ride and everyone remembers it clearly. More important, most of us never totally recover from that first ride, especially if it was in a World War II airplane. And mine actually was a ride, not a flight: My first ride was traveling backward down Highway 15, a few miles north of my hometown in Nebraska in the back seat of a BT-13A.

“Backward down Highway 15?” Yes, you read that right. I was six years old, and just a few minutes earlier, the pilot, almost certainly a WW II vet (the war had been over three years), had landed that BT-13 in a field alongside the highway. Then my dad and some of the help from his store manhandled the tail high enough so that they could back his pickup truck under it and lash the tailwheel into the bed. Just before pulling out onto the highway heading for town, the pilot hoisted me up into the back seat. Carefully buckling the wide military seat belt and shoulder harness around me, he gave me very strict instructions: “Now…it’s your job to hold the stick all the way back. If you let it go, the tail of the airplane will break off.”

So for the next 15 minutes, I sat there, gritting my teeth and hugging that tall control stick to my chest. I don’t remember any of the trip—not a foot of it—because I never looked outside. I do, however, remember, as if it were this morning, staring at that exotic expanse of flat black and olive drab paint ornamented with fading gauges that could only be understood by super men. Unbeknownst to my parents and me, that short trip would prove to be the most important of my life, bar none. Those few miles transported me from a small, rural community to the unlimited world represented by aviation. I was thoroughly hooked! I was more than hooked. I was a hardcore av-addict.

The reason the weather-worn trainer was being towed into town was most definitely not because my father thought I needed something in which to develop an interest. In fact, he didn’t like flying, so when I was learning to fly in high school, I’m certain he regretted unknowingly planting the seed of flying in his oldest son. He worried about his kids nonstop, and to have his son up there playing with airplanes preyed on his mind. He’s been gone more than 10 years now, but Dad, I’m sorry, it actually is your fault. I know you bought that BT-13 to be a signboard in front of your store, but it had a much bigger effect on this part of your family than you could possibly have anticipated.

For a number of years, until it was towed back to that same wheat field and flown out, that wonderful old airplane was my jungle gym, and there was no possible way that it couldn’t have infected me. The cockpit environment and aroma altered certain aspects of my chemical makeup, and I would never be the same. Military cockpits do that to almost everyone.

No airplane of any kind smells like a military airplane—
especially one that hasn’t been restored, which unintentionally upsets the delicate balance that exists between the aroma of hydraulic fluid mixed with oil and some sort of vaguely waxy/musty smell that old seat belts and shoulder harnesses give off. This is especially noticeable if the airplane has been baking in the sun for a while.

Even if you’re smell-blind, the environment of a military cockpit can’t help but reach in and touch your adrenaline-flow buttons. There is an overwhelmingly businesslike attitude to that collection of ominous placards, knobs, spigots and levers, and console-mounted switches and gauges that say this is not an airplane built to take you to grandma’s house. The purpose of every military airplane is clear the instant you strap it on: It exists to conquer an enemy or to support that goal, even if a trainer. 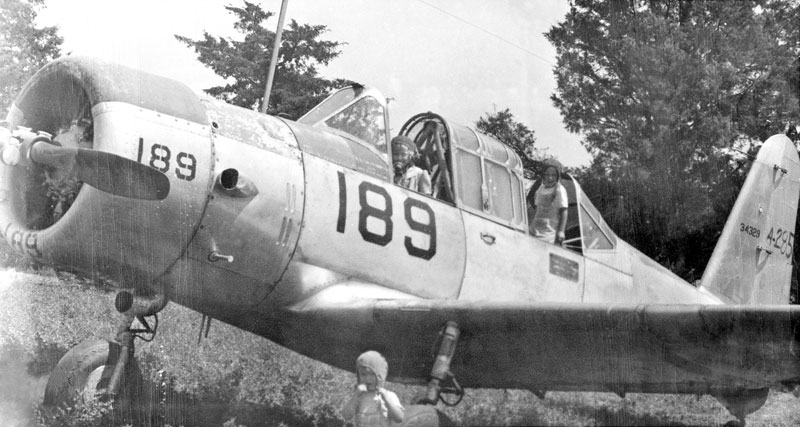 A six-year-old Flight Journal editor-in-chief stands in the back seat while in the act of developing a severe aviation addiction. Sister is in the front seat; younger brother down by the wheel. The scene is in the grass next to our father’s general store in Seward, Nebraska, 1948.

I never flew for the military, and that regret is finally fading. However, the hours and hours the adolescent me spent baking in that zinc chromate and steel tube womb created a military-oriented aviator as surely as months at Pensacola or Randolph Field would have. A military trainer teaches you more than how to fly. Its cockpit environment gives you the subliminal foundation upon which attitudes toward flying are built that are different from those of a purely civilian pilot. They aren’t better. They aren’t worse. They’re just different. And every vet knows what I’m saying.

This is very hard to explain. You literally have to have been there. And in my own very small way, I was.

By Budd Davisson
From the February 2016 issue of Flight Journal.