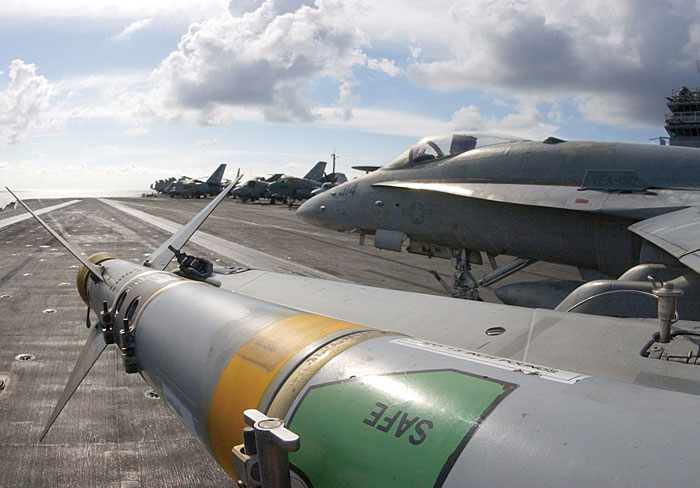 Kern County, California, 1952: a 1949 Kaiser raced down a desert runway with a streamlined object fitted to a crude bracket on the right side. Lacking a wind tunnel, the passengers — engineers in the front and back seats — took notes on the model’s aerodynamic performance.

They were testing the XAAM-N-7, the world’s first infrared air-to-air missile (AAM). Sixty-two years later it remains the world standard.

The most widely used AAM in history began at the Naval Weapons Center at China Lake in 1946. The concept of a heat-seeking missile was named Sidewinder for the desert rattlesnake that homes on its victim’s body temperature.  It was the brainchild of Dr. William B. McLean, a naval scientist.  One of his project pilots was then Lt. Wally Schirra who recalled, “He sold his brainchild for the proverbial dollar.  He was a wonderful guy to know: innovative, hardworking and fun.”

Based on a five-inch rocket body containing barely 20 moving parts, and a solid-fuel rocket motor, the XAAM-N-7 became the AIM-9 to the Navy and originally GAR-8 to the Air Force.  For guidance, McLean’s team conceived a rotating reticle mirror system in the seeker head, controlling canards that steered the Mach 2 missile toward its target. Pilots knew the seeker was tracking when they heard a “growl” in their earphones —  louder being better.

The ’winder weighed about 190 pounds including a blast-fragmentation warhead of 20 pounds or more. It killed by direct impact or a proximity fuse releasing an expanding-rod cone that severed airframe parts. The early models were produced for about $1,000 each —roughly $9,000 today.