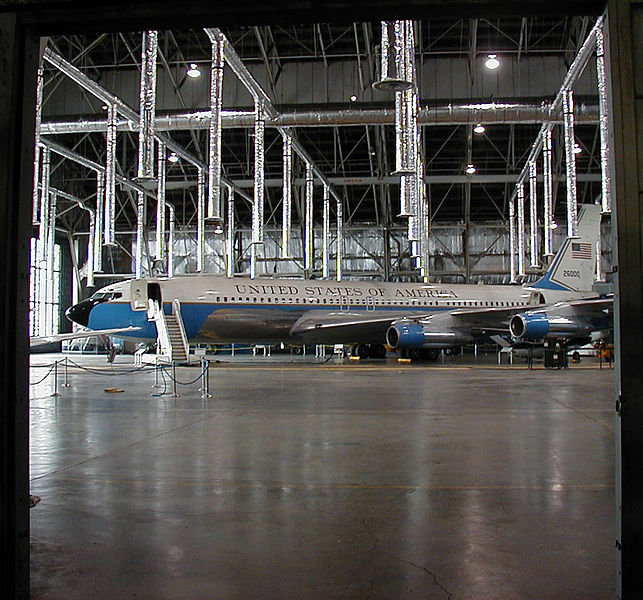 A battle is brewing over who gets to display the Air Force One jet aboard which president Lyndon B. Johnson took the oath of office.

The Austin American-Statesman reports the LBJ Foundation raised millions of dollars and planned to build a pavilion by the LBJ Presidential Library to house the VC-137C, a modified Boeing 707 the U.S. Air Force flew to transport U.S. presidents from 1962 until a Boeing 747 variant replaced it in 1990. The jet is on display at the National Museum of the U.S. Air Force at Wright-Patterson Air Force Base near Dayton, Ohio. Last week, Republican Rep. Michael Turner of Dayton and Republican U.S. Sen. Rob Portman of Ohio wrote to the air force secretary opposing the move.

Johnson was sworn in aboard the jet Nov. 22, 1963, after president John F. Kennedy was assassinated in Dallas.

“We do not want an adversarial fight, but we want to make our case as to why that plane should be relocated to Austin,” foundation chairman emeritus Tom Johnson, a former Johnson aide who isn’t related to the former president, told the newspaper.

The foundation, which supports the LBJ library and the LBJ School of Public Affairs at the University of Texas at Austin, hoped the air force could loan the aircraft to the library, Johnson said, but “we would love for it to be a permanent loan.” However, Portman and Turner said in their letter that “significantly fewer visitors would be exposed to the aircraft” if it were moved from the Air Force museum.

“Occupying nearly 14 acres, the LBJ Library lacks the necessary facilities to house an aircraft the size of Air Force One,” they stated in the letter.

Air Force Museum spokeswoman Diana Bachert said its “collection of presidential aircraft and their holistic display is unique,” as the displays allow visitors “to see and experience an unbroken continuum of over six decades of Air Force and national history.”

However, the LBJ Foundation cited the precedent set by the Ronald Reagan Presidential Foundation and Library in Simi Valley, Calif., which in 2005 scored one of the VC-137Cs that flew Reagan.

“They have many splendid historical aircraft,” Tom Johnson said of the Air Force museum, “and we would just like one.”

Luci Baines Johnson, LBJ’s younger daughter, said her father had flown around the world in the plane in 1967, and it was this same aircraft that carried Johnson home at the end of his presidency in 1969. The plane has a “magnetism and attraction” and would be “an incredible teaching tool,” she said. “It would movingly express our story to generations of school children for whom we are part of the past,” she said in reference to bringing the plane to Texas.

The Ohio congressmen’s letter to the Air Force “was not by any means the last blow landed in this fight,” said former Texas Lt. Gov. Ben Barnes, a LBJ Foundation board member. He said Austin “was a superior location” the jet compared to “a town in Ohio.”