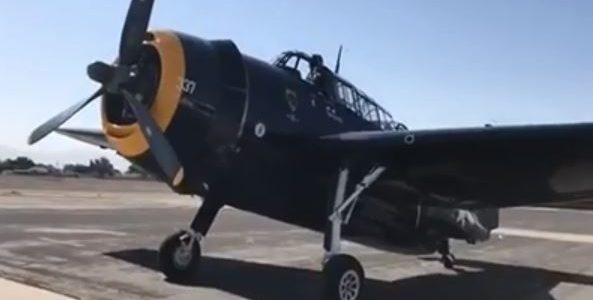 A Grumman TBM-3E Avenger 53337 registered N337VT (formerly VH-VTB, arrived in the USA in 2017) was probably destroyed in a crash near Fort Apache, Arizona. After an engine failure over mountainous terrain, the crew bailed out rather than attempt an emergency landing in what would probably have been extremely dangerous conditions.

Both crew members were injured upon landing but are recovering and are no longer with emergency services. The Avenger’s crash site has not yet been located and its exact condition is unknown.

Taigh Raimey of Vintage Aircraft in Stockton, California, writes: “The owner, Ron, was flying the TBM home from California and was on a leg from Phoenix to Albuquerque when he had what he called a catastrophic engine failure at around 12,000 feet.

The terrain was pretty rough and they decided to bail out instead of trying to put it down in the rugged mountainous area below. Ron said he rolled it over a bit so his passenger could get out and after he was safely clear Ron followed shortly after.

They landed in a heavily forested area and his passenger was caught in a tree about 30 feet up. In the process of getting himself down he fell and hit pretty hard. Ron also hit hard but his helmet to save him from more serious injuries. Both Ron and Kenney were pretty beat up but are going to recover. In fact they are on their way home as I write this.

The TBM-3E 53337 was a sweetheart for sure. The previous owners in Australia did a lot of work on the old gal and she was in great shape. We helped with the pre purchase inspection, import and licensing/airworthiness. We also put a lot of the original WWII gear back in to make her more authentic. Ron was going to take her to the TBM gathering that is coming up and was very excited to do so.

We are so relieved that Ron and Kenney are okay. We are also heartbroken that the TBM is gone as we really became attached to the old gal. They still haven’t located the wreck so I guess there is a slim chance that she put down by herself but that is our dream at this point.”

Here’s a recent video of the plane undergoing restoration in Stockton, California.