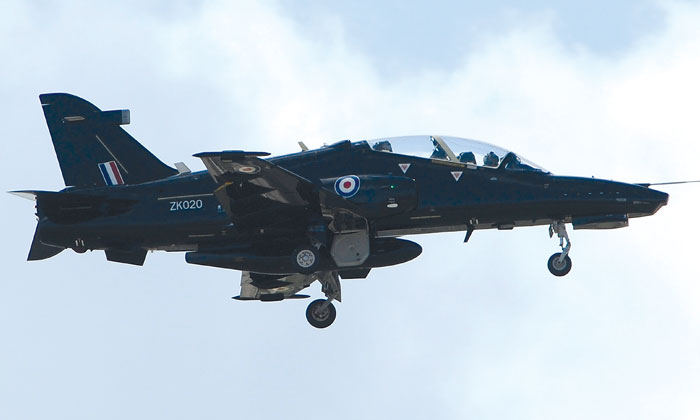 In its effort to promote the Hawk Advanced Jet Trainer (AJT) is a perfect replacement for the U.S. Air Force’s T-38C Talon, two Hawks embarked upon a “road tour” of the United States that began with an airshow performance in Fort Worth, Texas, on October 21. The tour was scheduled to end in January at Randolph Air Force Base, Texas, the home of the USAF’s Air Education and Training Command.
BAE Systems, successor company to Hawker Siddeley which created the popular Hawk (first flight: August 21, 1974), is teamed with Northrop Grumman, which once manufactured the T-38, to market the Hawk AJT in the USAF’s pending T-X program. The U.S. Navy operates a derivative, the T-45C Goshawk. The future of the T-X program is unclear in today’s tight-fisted budget environment but if the program moves ahead, Hawk AJT advocates say they have the best airplane for the job.
A pair of glossy black Hawk T.Mk2s on loan from No. 19 Squadron at Royal Air Force station Valley on the island of Anglesey, Wales, kicked off the tour by flying before an audience at the Fort Worth Alliance Air Show.
If T-X moves forward, the USAF will order about 350 aircraft. Other aircraft types being proposed include Italy’s Alenia Aermacchi M-346 Master, also called the T-100 and for which no U.S. partner company has been announced and South Korea’s KAI T-50 Golden Eagle, with Lockheed Martin as prime contractor. Boeing says it wants to build a new trainer but will decide only when more is known about T-X.
The average age of a T-38 today is 43 years but most aircraft in the fleet are capable of logging more flying hours. When Air Force Secretary Michael Donley recently named programs he hoped to spare from pending budget cuts, T-X was not among them.
The Hawk AJT for the T-X program would be a “new build” version of a design that’s now 40 years old.
Four pilotsAndy Blythe and Steve Long of BAE Systems and Flight Lieutenants John Rigg and Paul Heasman of the Royal Air Force—are on the road tour. By the time they were away from home, No. 19, the last RAF squadron that participated in the Battle of Britain, was scheduled to be disbanded on November 24, 2011 and reformed as No. 4 Squadron at Valley. —Robert F. Dorr