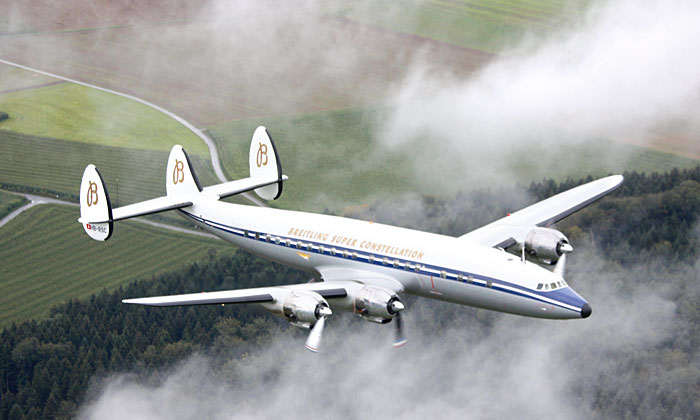 Superlatives flow—almost as smoothly as the lines of this unique and airworthy Lockheed L1049 Super Constellation. Thanks to the Super Constellation Flyers Association (SCFA) of Basel, Switzerland, European enthusiasts can now see and fly in this unique piece of 1950s commercial aviation history again.
In 2009, this Europe-based Super Constellation was grounded following identification of considerable corrosion in the aircraft’s main wing spar—many pundits predicted that the aircraft wouldn’t fly again. They were wrong! On April 30, 2011, Super Constellation, HB-RSC was rolled out of the hangars at the Black Forest/Lahr airport in southern Germany after an extensive overhaul, main wing spar replaced and wearing a stunning new livery reminiscent of the classic 1950s/1960s Air France livery; this had been applied by SR Technics at Zurich in mid-April. Now prominently displaying the aircraft’s long term sponsor—and savior with a Euro 200,000 donation—Breitling Super Constellation on its fuselage, HB-RSC, named Star of Switzerland was ready for the 2011 European airshow circuit. Total cost of the refurbishment was 500,000CHF ($550,000). By February 2011, SCFA members had raised 340,000CHF, so with this, Breitling’s donation and voluntary help from many companies and individuals, the maintenance work could be completed.
The first major outing for HB-RSC was on June 26, 2011 at the Paris Air Show at Le Bourget—since this, the 2011 season has seen the aircraft attend many shows and fly a blistering series of flights on behalf of members of SCFA. It is licensed as a non-commercial club aeroplane—only members who have been registered as club members for at least 30 days prior can board the aircraft.
Built at Burbank (c/n 4175), it was delivered on November 1,1956 to MATS. It joined several ANGs until retired in 1972 and flown to Davis-Monthan AFB. It became N73544 and flew to Chino, California in 1983, purchased by Daryoush “Benny” Younesi. It ended up at Camarillo, California and SCFA’s predecessors agreed a lease/purchase agreement so that in late April 2004 it began a six sector transatlantic ferry flight to Basel, Switzerland. —Geoff Jones