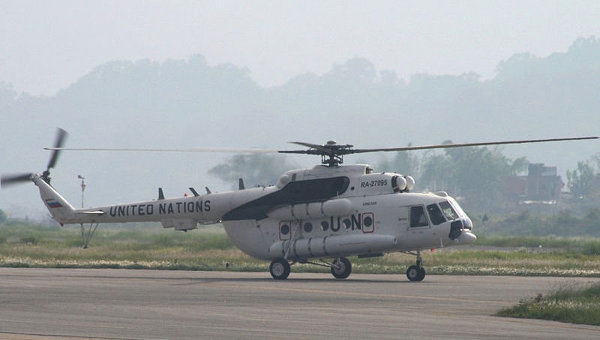 A rebel commander shot down a U.N. helicopter Tuesday in rural South Sudan, said a government spokesman. The U.N. has confirmed the crash of one of its helicopters and said it was investigating the cause.

The U.N. mission said on Twitter that an Mil Mi-8 cargo helicopter crashed near Bentiu, which is hotly contested between the government and rebel fighters. The U.N. said it is deeply concerned about the fate of its crew. A search and rescue team has been sent to the crash site, it said.

Contact with the helicopter was lost at about 3:19 p.m. local time and it was apparently shot down near Bentiu, said a U.N. official, who insisted on anonymity because he was not authorized to speak to the press.

The U.N. search and rescue team found three dead at the crash site, said Wek. One person survived, he said. The U.N. had not yet confirmed any deaths or the number of people on board the helicopter.

Gadet warned the U.N. last week that he would shoot down any U.N. planes that flew over his territory, said Wek.

South Sudan has seen widespread violence between rebels and the national army since December.