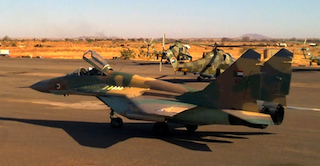 A Sudanese air force pilot died on Wednesday when his fighter plane crashed, the army said, in the country’s latest military aviation accident.

“Yes, it is a fighter plane that crashed in El Obeid and the pilot of the plane lost his life as a martyr,” the Sudanese army spokesman Sawarmi Khaled Saad told news service AFP. “The fighter plane had returned from a mission and faced technical problems when it tried to land. Then it crashed inside Obeid airport and burned.”

The military relies heavily on air power in its campaign against the Sudan People’s Liberation Movement-North (SPLM-N) in South Kordofan and nearby Blue Nile state. The SPLM-N claimed to have shot down a Sudanese Antonov bomber with heavy machine gun fire on November 7 but they have not been able to provide evidence to support their claim.

Sudan, which is also fighting an uprising in far-west Darfur, operates SU-25 ground attack aircraft and has also acquired MiG-29 fighters, according to the Small Arms Survey, a Swiss-based independent research project.

Sudan’s armed forces, relying on Russian-made planes and helicopters, have suffered a number of aircraft losses in recent years. In October, 15 Sudanese military personnel were killed when their transport plane crashed west of Khartoum on its way to Darfur, state media reported at the time. In July, Darfur rebels said they shot down an Mi17 helicopter, killing seven personnel from the military which blamed a malfunction for the incident.

Last December, all six crewmen aboard another military helicopter died when it crash-landed and burned in North Kordofan. The army cited a technical problem, as it did in April 2011 when a helicopter went down in Darfur killing all five soldiers on board.