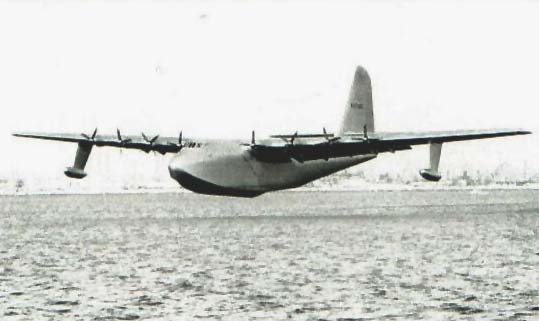 The Hughes H-4 Hercules (registration NX37602) (“Spruce Goose”) is a prototype heavy transport aircraft designed and built by the Hughes Aircraft company. The aircraft made its only flight on November 2, 1947 and the project was never advanced beyond the single example produced. Built from wood because of wartime raw material restrictions on the use of aluminium, it was nicknamed the “Spruce Goose” by its critics, despite being made almost entirely of birch, rather than spruce. The Hercules is the largest flying boat ever built, and has the largest wingspan of any aircraft in history. It survives in good condition at the Evergreen Aviation Museum in McMinnville, Oregon, USA.

In 1942, the U.S. War Department was faced with the need to transport war materiel and personnel to Britain. Allied shipping in the Atlantic Ocean was suffering heavy losses to German U-boats, so a requirement was issued for an aircraft that could cross the Atlantic with a large payload. Due to wartime priorities, the design was further constrained in that the aircraft could not be made of metal.

The aircraft was the brainchild of Henry J. Kaiser, a leading Liberty ship builder. He teamed with aircraft designer Howard Hughes to create what would become the largest aircraft built at that time. When completed, it would be capable of carrying 750 fully equipped troops or one M4 Sherman tank. The original designation “HK-1” reflected the Hughes and Kaiser collaboration.

The HK-1 contract was issued in 1942 as a development contract, and called for three aircraft to be constructed under a two-year deadline in order to be available for the war effort. Seven configurations were considered,including twin-hull and single-hull designs with combinations of four, six and eight wing-mounted engines. The final design chosen was a behemoth, eclipsing any large transport then built. To conserve metal, it would be built mostly of wood (its elevators and rudder were fabric covered; hence, the “Spruce Goose” moniker tagged on the aircraft by the media. It was also referred to as the Flying Lumberyard by critics. Hughes himself detested the nickname “Spruce Goose”.

While Kaiser had originated the “flying cargo ship” concept, he did not have an aeronautical background and deferred to Hughes and his designer, Glenn Odekirk.[8] Development dragged on, which frustrated Kaiser, who blamed delays partly on restrictions placed for the acquisition of strategic materials such as aluminum, but also placed part of the blame on Hughes’ insistence on “perfection.” Although construction of the first HK-1 had taken place 16 months after the receipt of the development contract, Kaiser withdrew from the project.[10]

Rearward view of the Hercules H-4’s fuselage Hughes continued the program on his own under the designation “H-4 Hercules”, signing a new government contract that now limited production to one example. Work proceeded slowly, with the result that the H-4 was not completed until well after the war was over. It was built by the Hughes Aircraft Company at Hughes Airport, location of present day Playa del Rey, Los Angeles, California, employing the plywood-and-resin “Duramold” process – a form of composite technology – for the laminated wood construction, which was considered a technological tour de force. It was shipped by a company specializing in house moving, in three large sections consisting of the fuselage, each wing, and a fourth smaller shipment containing the tail assembly parts and other smaller assemblies on streets to Pier E in Long Beach, California. After final assembly, a hangar was erected around the flying boat at that location, with a ramp to launch the H-4 into the harbor. This building became the first climate-controlled building in the United States.

In 1947, Howard Hughes was called to testify before the Senate War Investigating Committee over the usage of government funds for the aircraft.

During a Senate hearing on August 6, 1947 in the first of a series of appearances, Hughes said:

The Hercules was a monumental undertaking. It is the largest aircraft ever built. It is over five stories tall with a wingspan longer than a football field. That’s more than a city block. Now, I put the sweat of my life into this thing. I have my reputation all rolled up in it and I have stated several times that if it’s a failure I’ll probably leave this country and never come back. And I mean it. 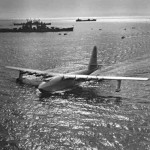 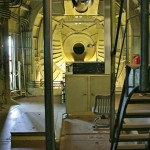 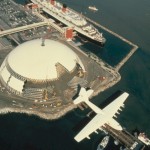 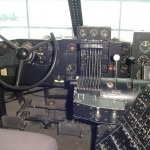 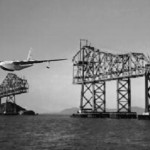 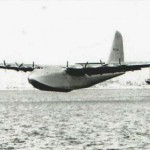