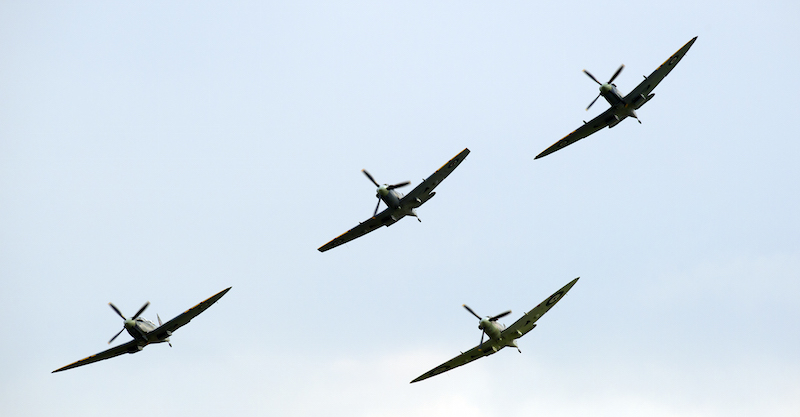 This September, IWM (Imperial War Museum) Duxford’s The Battle of Britain Anniversary Air Show will tell the story of this vital aerial battle in its 75th anniversary year.

The Battle of Britain Anniversary Air Show, set for Sept. 19-20, will be an immersive and poignant experience for everyone. Epic flying displays, including a massed flypast of twenty Supermarine Spitfires, will be combined with wartime music and the voices of men and women who served. Living history groups will recreate the daily life of RAF Duxford as a Battle of Britain Fighter Station in 1940.

The flying display explores the development of the Battle of Britain and its significant role in the Allied victory of the Second World War. The Coming of the  Second World War demonstrates how RAF Duxford prepared for active service, the arrival of the Supermarine Spitfire, and the importance of the radar stations that formed an integral part of the air defense of Great Britain.

The Outbreak of the Second World War looks at the events that followed Britain’s declaration of war on Germany, when Britain stood alone against the German forces. We mark this with a display by the Bristol Blenheim, accompanied by two Hawker Hurricanes and a Hawker Sea Hurricane.

The beginning of the Battle of Britain is commemorated by a Spitfire scramble. Hispano HA-112 MIL (Buchon) aircraft fly in and as the scramble bells sounds, living history interpreters representing RAF fighter pilots race to the airfield and Supermarine Spitfires chase off the enemy aircraft.

Visitors will hear the audio memories of Battle of Britain pilots, recalling waiting to scramble and the exhilaration of the dogfight.

A flying display of North American Harvard and Yale aircraft will demonstrate the varying formations and tactics employed by the RAF as the Battle of Britain continued.

The Duxford Big Wing came into operation for the first time in a patrol over North Weald. This key moment in Duxford’s history is honoured with a massed flypast of twenty Spitfires taking off from this historic Second World War airfield.

The sacrifice made by Battle of Britain pilots and the feat of winning the battle is commemorated with contemporary displays including the Red Arrows (Sunday only) and the Aerostars (Saturday only).

Tickets will be available only in advance.

Story and photo by IWM Duxford