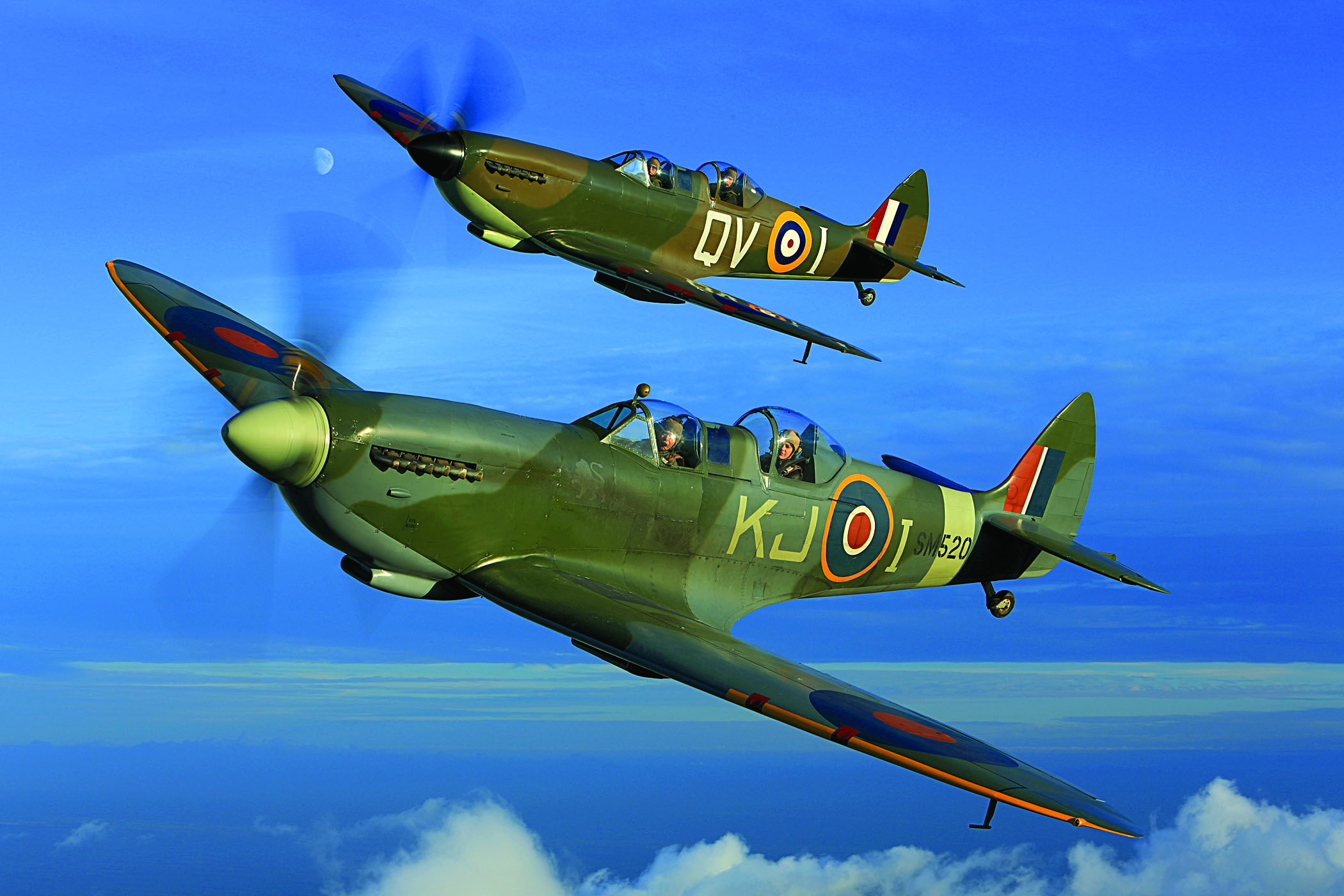 From World War II’s outbreak, through the “Finest Hour” of the Battle of Britain to ultimate victory in May 1945, one Allied fighter was there matching the enemy at every level on every front — the Supermarine Spitfire. One of the most iconic aircraft ever produced, until recently, flying this superb ship remained solely the domain of WW II veterans and the select few enthusiasts wealthy enough to restore and fly one. Thanks to an innovative British organization called the Boultbee Flight Academy, the situation is changing. The Academy is teaching pilots to fly the Spit at the same airfield where America used the type to launch its first wartime combat operations. Gracing the skies where history was made in the most famous of WW II fighters is now open to another generation of pilots. Luckily for us, it’s our generation.

The Boultbee Flight Academy is based at Goodwood, a legendary racing track and airfield on England’s beautiful south coast. At the heart of the action during the Battle of Britain, it later hosted Eighth Air Force pilots flying Spitfire Mk.Vbs. With its quintessential British feel, Goodwood’s grass strip is home to Boultbee’s aircraft and the range of training courses they offer. One of the options is learning to fly in formation with another two-seat Spitfire. Boultbee kindly offered me this significant opportunity during the photo sortie and believe me, every second is exceptional. After being thoroughly briefed and strapped in by Boultbee’s co-founder and managing director Matt Jones, my pilot John Dodd yells, “Clear prop!” and the Merlin roars into life. The powerful vibrations ran through the soles of your feet, swiftly traveling up your body and along your spine. The sound brings chills to the back of your neck, causing an uncontrollable grin, or quite possibly, tears. The Spitfire isn’t just aluminum and rivets, it’s pure history and emotion.

On the ground, Boultbee’s Spitfire Tr.IX G-ILDA is like a pinned butterfly, wings shaking and shuddering, desperate to get into the air where it belongs. Lining up on the runway to lead our formation takeoff, Dodd opens the throttle and the Merlin’s 1,670hp tears the Spit loose of its ground shackles. This thoroughbred aircraft is finally free, and as we rise, I look over my shoulder transfixed by the incredible sight of the other Tr.IX G-CCCA taking off in close formation behind. Once airborne, it’s breathtaking to gaze out over the RAF roundel emblazoned on that distinctive elliptical wing, one of history’s most iconic silhouettes, with a magnificent autumnal sunset on the starboard horizon and another Spitfire chasing mere feet from the wingtip beyond my other shoulder. Not only do you “slip the surly bonds of earth” in this aircraft, you can also lose decades in a Spitfire as your imagination is fired by those who flew the stunning machine in combat conditions.

When the European conflict began in 1939, a select band of brave young Americans traveled to England to join a foreign military: the Royal Air Force. Driven by adventurous spirits and a love of flight, they would form the three legendary Eagle Squadrons, taking the war to the enemy at the controls of the Spitfire, the RAF’s elite fighter. Those battle-hardened veterans who survived the furious air war became the backbone of the Fourth Fighter Group. Legendary American Spitfire pilots such as Colonel Donald J. M. Blakeslee, Major James A. Goodson and Captain Dominic S. Gentile still rank among America’s all-time top fighter aces. When the U.S. officially joined the conflict and sent the mighty Eighth Air Force to Europe, the Eagle Squadron pilots passed their hard-won knowledge of aerial warfare to the green airmen who found themselves far from home and fighting a determined enemy.

In August 1942, the men of the 308th and 309th Fighter Squadrons, 31st Fighter Group, arrived at Westhampnett. On arrival they were re-equipped with Spitfire Mk Vbs, better suited to bomber escort missions than the Bell P-39 Airacobras the pilots had trained on Stateside. They operated at the heart of the action, becoming the first complete fighter group on British soil and the first to enter combat.

Seventy-one years later, Westhampnett still thrives. Now called Goodwood, the field’s timeless air makes it easy to imagine the era when it bustled with the 31st FG pilots and crew. The Boultbee Flight Academy offices retain an equally 1940s feel with their aircraft occupying nearby Hangar 8. The fleet includes a de Havilland Tiger Moth and Chipmunk, a North American T-6 Harvard and of course, Spitfire Tr.IX G-ILDA. There’s even a red double-decker London bus in the hangar, serving as a memorable office for pre- and post-flight paperwork.

Boultbee has cleverly devised several options to get ICAO PPL holders airborne in the Spitfire, their most popular being the two-day introduction course. All training and ground-schooling is undertaken by Boultbee’s highly experienced instructors. Following the path of wartime pilots, your journey begins on one of the de Havilland types. Next comes time in the North American Harvard before reaching the ultimate goal of flying the two-seat Spitfire. Boultbee can assist you in getting a PPL if required, and will also train you up to earn your full type rating on each aircraft, including the Spit. Imagine that on your license. Additional “bolt-ons” are available teaching the skill of formation and display flying. For those who inevitably fall head over heels with this most graceful fighter there is the opportunity to keep history alive by purchasing a 1/10th share in a single-seat Mk.IX Spitfire. Non-pilots are welcomed to the syndicate too, and will receive their share of fun via Boultbee’s two-seat Spitfire. While warbirds are seldom cheap, this may be the most affordable entry yet to this ultra-rare type. Flying the Spitfire will leave you smiling for weeks every time you recall the exhilaration of being in that cockpit. Boultbee is unlocking this powerful experience to the world and bringing a previously unknown accessibility to a true aviation classic.
boultbeeflightacademy.co.uk

The author and photographer would like to thank Matt Jones and the Boultbee Flight Academy. G-ILDA was flown by John Dodd, with John Romain piloting G-CCCA. Tim Ellison flew the cameraship.