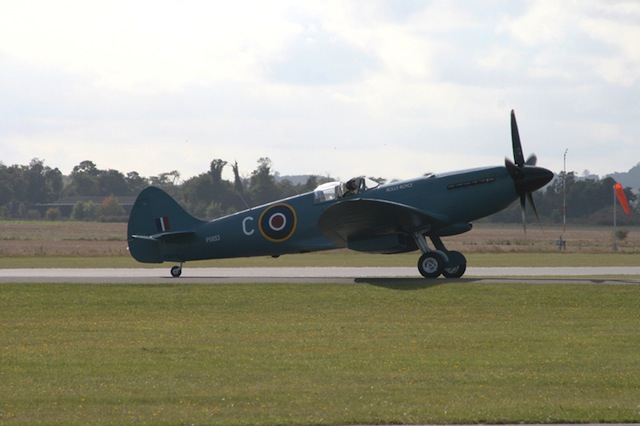 Airport officials say an antique Spitfire aircraft owned by engine company Rolls Royce collapsed shortly after landing at East Midlands Airport in central England. The airport said in a statement the World War II-era plane’s undercarriage failed as it touched down Monday afternoon. The pilot was unharmed and the damaged aircraft was towed away.

The sleek-looking Spitfire played a pivotal role in the Battle of Britain, when the single-seat fighter helped beat back waves of German bombers. More than 20,000 were built, although only a few dozen remain in working order today.

Rolls Royce, which built the Merlin engines used to power the fighters, says it bought this plane in 1996. It typically appears at airshows and corporate functions.

The Spitfire, or PS853 as its popularly known, is an unarmed, high-altitude reconnaissance aircraft, one of a batch of 79 Mk XIXs built at Supermarine, Southampton. The Mk XIX was powered by the 2,050-hp Griffon 65 or 66 and represents the pinnacle of the Spitfire’s development in terms of speed and altitude capability with a top speed of 446 mph and a ceiling of 42,000 feet.

PS853 was delivered to the Central Photographic Reconnaissance Unit at RAF Benson on Jan. 13, 1945, before moving to Belgium and Holland. The aircraft was engaged on active service with 16 Squadron up until the end of the war and participated in Operation Crossbow to detect V1 and V2 “vengeance weapon” launch sites.

In 1996, Rolls-Royce bought PS853 to replace the original Rolls-Royce Spitfire XIV, G-ALGT, which had been destroyed in a crash in 1992. The aircraft was re-registered as G-RRGN; the RR for obvious reasons and the GN after the drawing number prefix allocated to Griffon engine parts. The aircraft is painted as ‘C’ of No. 16 Photographic Reconnaissance Squadron, 2nd Tactical Air Force, being the markings PS853 wore between January and June 1945.