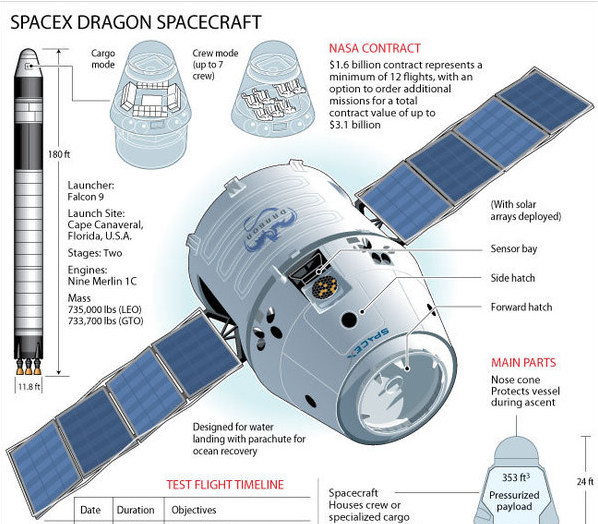 Visit msnbc.com for breaking news, world news, and news about the economy

SpaceX’s Dragon cargo capsule parachuted to a splashdown in the Pacific Ocean today, ending the first-ever commercial mission to the International Space Station.

The 19-foot-long (6-meter-long), gumdrop-shaped Dragon made history last week as the first U.S. craft to reach the orbital station since last year’s retirement of the space shuttle fleet, and it made history today as the first commercial craft to return a shipment from orbit.

The demonstration flight began on May 22 with the Dragon’s launch from Cape Canaveral Air Force Station in Florida, atop a SpaceX Falcon 9 rocket. The mission reached its climax last Friday when astronauts used the space station’s robotic arm to pull the Dragon in to its docking port on the the station’s Harmony module. On the following day, when station crew members entered the Dragon for the first time, NASA astronaut Don Pettit gushed over its new-car smell.

Over the days that followed, the station’s crew unloaded a half-ton of food, equipment, experiments and other supplies — then loaded it back up with about 1,600 pounds (660 kilograms) of non-essential Earth-bound shipments. Today, astronauts reversed the process they went through last week. The robotic arm pulled the Dragon out from its port and positioned it for release at 5:49 a.m. ET. SpaceX’s craft then executed a series of engine burns to take itself out of the station’s neighborhood and descend from orbit.

The final engine burn slowed the Dragon’s orbital velocity by 100 meters per second (224 mph) — enough to drop it into a fiery descent through the atmosphere. The craft’s bottom is coated with a layer of protective material called PICA-X, which SpaceX’s engineers say is resilient enough to weather a return to Earth from Mars. At its peak, the heat shield had to endure temperatures in excess of 3,000 degrees Fahrenheit (1,650 degrees Celsius).

The suspense built during a few minutes of scheduled communication blackout, but eased when infrared imagery from airplanes circling the projected splashdown site showed the Dragon’s parachutes opening. For some observers, the sight of three red-and-white main parachutes sprouting from the capsule sparked a flashback to the days of the Apollo moonshots.

At 11:42 a.m. ET, SpaceX’s controllers confirmed that the craft made a successful splashdown. NASA mission commentator Josh Byerly observed that the Dragon mission “ended like it began — which is fairly easily.” 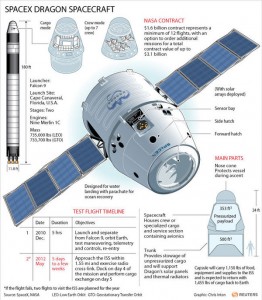 A pre-positioned flotilla of recovery ships will recover the Dragon and bring it back to Los Angeles, near SpaceX’s Mission Control in Hawthorne, Calif. Some high-value experimental payloads will be unloaded in L.A. and delivered to NASA within 48 hours, but the bulk of Dragon’s cargo will be taken off after the Dragon is transported to SpaceX’s test facility in MacGregor, Texas.

This test mission is expected to open the way for SpaceX to begin orbital cargo deliveries in earnest later this year, with 12 flights scheduled through 2016 under the terms of a $1.6 billion contract with NASA. Another company, Virginia-based Orbital Sciences Corp., is working on an alternate commercial delivery system, but that system hasn’t yet gone through flight testing.

Such deliveries are part of NASA’s grand plan in the post-shuttle era to transfer space station resupply operations to commercial companies, at what is expected to be a cost far less expensive than space shuttle operations. Theoretically, that would free up money for NASA to concentrate on developing a more powerful heavy-lift rocket and a more capable Orion spacecraft for missions beyond Earth orbit — heading toward asteroids, the moon and eventually Mars.

SpaceX and three other companies — Blue Origin, the Boeing Co. and Sierra Nevada Corp. — are working on spacecraft capable of transporting astronauts to and from the station, and NASA expects those ships to be available for its use as early as 2017. SpaceX’s crew-carrying craft will be an upgraded version of the Dragon that was used for the current cargo mission.

SpaceX, known more formally as Space Exploration Technologies Corp., was founded in 2002 by dot-com billionaire Elon Musk, as part of his own grand plan to help humans get to Mars and become a “multiplanet species.”