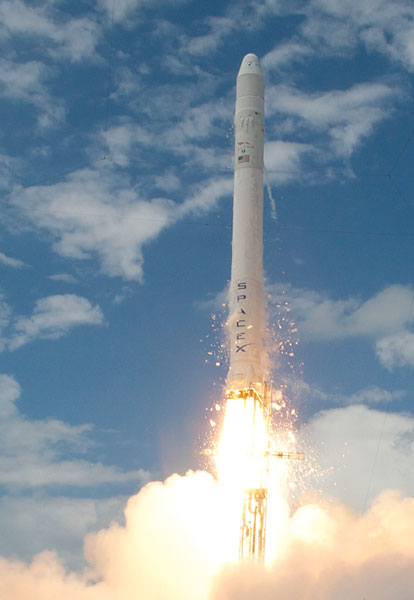 Space flight history was recently enjoyed by the SpaceX Company, when its Falcon 9 launch system successfully carried its Dragon spacecraft into low orbit and returned it safely to a predetermined splashdown point some 500 miles (804 kilometers) off the coast of southern California. This was the first time a commercial company had successfully recovered a spacecraft from low-earth orbit—a feat performed by only six nations or government agencies heretofore: the U.S., Russia, India, Japan, China and European Space Agency.

The SpaceX Falcon 9 launch system is a larger follow-on to the SpaceX Falcon 1 launch vehicle. The Dragon spacecraft, also designed and built by SpaceX, can be configured to carry cargo to the International Space Station (ISS) or astronauts to that facility during future flights. NASA is interested in having SpaceX fly at least 12 resupply missions to the ISS after the Space Shuttle fleet is retired.

SpaceX launched its Dragon spacecraft at 10:43 a.m. EST atop its Falcon 9 rocket from Launch Complex 40 at the Air Force Station at Cape Canaveral, Florida; it returned to land off California shortly after 2 p.m. EST after two full orbits. —Steve Pace