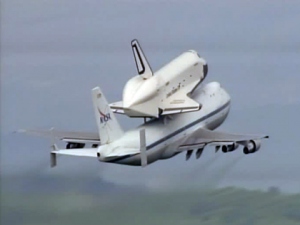 NEW YORK (CBSNewYork) – Space shuttle Enterprise has officially left Washington and is now on its way to New York City.

Enterprise was the first shuttle ever to be built by NASA. It never flew into space, but Enterprise paved the way for others that did. NASA engineers used the Enterprise to figure out how to land a shuttle, launching the glider from the back of a modified 747 in 1977.

After years at the Smithsonian Museum in Washington, its new home will be on the deck of the Intrepid Sea, Air and Space Museum.

Last week, a Royal Navy fighter-bomber, a Douglas Sky Knight and a North Korean MIG-15 were hoisted from the flight deck and put onto a barge. The military aircraft were removed from the Intrepid’s collection to make room for the newest space shuttle exhibit.

“We’re just so thrilled that we’ll be the ones to perpetuate its history and tell the story to what will be the millions of people who will come to see it,” said Susan Marenoff-Zausner, president of the Intrepid Museum.

After its flyover of city landmarks, the shuttle will be stored at a hangar at JFK until June.

“Then it will come up by barge on June 6 up to the Intrepid,” said Marenoff-Zausner. ”It’s going to be an amazing day. It’ll be a crane that will take it and put it on the flight deck.”

The exhibit will open to the public in mid-July.