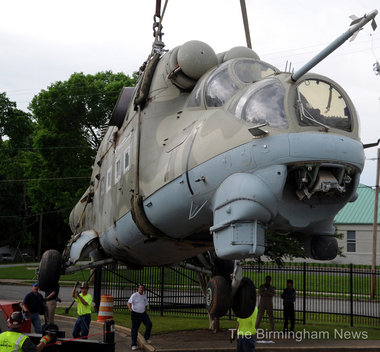 BIRMINGHAM, Alabama — The hull of one of the most feared helicopters in history arrived at the Southern Museum of Flight Tuesday, riding on the back of a trailer 186 miles from the Fort Rucker U.S. Army Aviation Center of Excellence.

It was a camouflage-painted, Mi-24 Hind.

The Hind was a flying gunship that became the iconic image of the Soviet Union’s war in Afghanistan in the 1980s. It was also a metaphor for the unequal struggle between an advanced technology super-power and a lightly armed guerrilla force on the ground.

This Mi-24 Hind will be restored over the next six to nine months. Visitors can watch as the flight museum attaches the copter’s tail section, its massive wing stubs, and the five-bladed, 57-foot titanium rotor. The completed helicopter, with its distinctive double-bubble cockpits for gunner and pilot, will be the centerpiece of a new museum exhibit on the Cold War — that 50-year standoff between the U.S. and its NATO allies against the communist hegemony under the Soviet Union.

The Southern Museum of Flight also received a host of spare parts and a stack of flight logbooks and manuals, some written in Russian and others in Czech. The museum has hired a translator to decipher the Russian, and would love to find a Czech-speaking volunteer to help with the rest, said museum executive director Jim Griffin.

Birmingham’s Mi-24 Hind was slated to be destroyed until a confidential source alerted museum officials about 10 months ago, Griffin said, and the office of Sen. Jeff Sessions and several Army veteran groups helped persuade the government to give it to the museum instead.