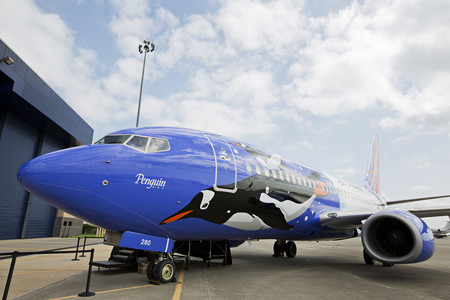 Southwest Airlines on Thursday unveiled the airline’s newest specialty aircraft, Penguin One — a Boeing 737-700 co-branded with images of one of SeaWorld’s iconic animals.

“SeaWorld has been an important partner to Southwest Airlines for 25 years,” Kelly said. “Penguin One is a natural addition to the Southwest fleet and a great representation of the evolution of our partnership and our mutual dedication to travel, tourism, and family entertainment.”

The partnership between the two companies dates back to 1988, which began when SeaWorld opened in San Antonio. Southwest and SeaWorld launched their partnership in a high-flying way — with the introduction of a new Boeing 737, Shamu One.

“Our partnership with Southwest Airlines helps create memorable vacation experiences for families traveling to our SeaWorld parks,” said Atchison. “Today’s launch of Penguin One takes our relationship to new heights that will continue to benefit travelers for years to come.”

Penguin One joins 12 other 737s in the Southwest fleet that carry a unique paint scheme: Shamu One, Shamu Two, Arizona One, California One, Colorado One, Florida One, Illinois One, Lone Star One (Texas), MarylandOne, Nevada One, New Mexico One, and Triple Crown One.

From a Southwest Airlines news release