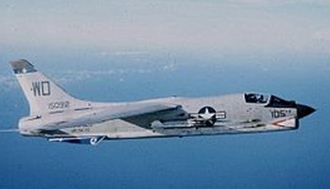 Each day, they launched their mighty delta-shaped craft into the stratosphere over the Gulf, skillfully following the electronic chess moves of Ground Control Intercept radar controllers until the blip of the simulated bad guy appeared on their own complicated radar scopes.  Then, they would tersely call “Judy!” over the radio, which indicated they were taking control of the intercept, and they tensely buried their heads in their cockpits and maneuvered the glowing blips on their own radar screens until a firing solution was achieved.  All this foreplay culminated in the exultation of the simulated “missile away” call of their mighty Falcon missile, which surely meant the simulated final destruction of the T-33 target aircraft that was pooting along like a giant, many-motored, Red- Star grape.  Though it was good for them, somehow, something was missing.

It was decided that “beer call” would have more tone if their stalwarts would do the dogfight like the jolly lads of the Battle of Britain against the Hun.  It wasn’t seemly to practice on the giant eight-engine bombers or the rowdy tactical types of their own kind–rather better to keen the edge against chaps of a lesser service.  Word was that raggedy-assed Naval Reservistas from the Land of Barbeque had fighters of a sort and would travel damn near anywhere for raw oysters.  The Light Blue Skipper had his people call the Dark Blue Skipper’s people, and it was arranged to do the dogfighting, which was now known by a proper service acronym, DACM, for “Dissimilar Aircraft Combat Maneuvering.”

Deployment day at the Big Red Fighter Squadron dawned with the sun gleaming redly off pools of hydraulic fluid on the ramp. Sailors scurried around, madly trying to find a start-cart that would work, while reserve fighter pilots filled their breakfast requirement with the traditional coke, puke, and smoke.

Puresome had defied all laws of nature and had lived long enough to be given a set of salty LCDR shoulder boards and green oak leaves for his collar by Crazy Horse, who had been percussively sublimated upward to CDR.  As a newly appointed semi-senior-citizen, Youthly was charged with leading a flight of four 55-foot-long, swept-wing, supersonic F-8 Crusaders on the hazardous mission of creating flight time.   A secondary mission was to arrive the same day, as a flight of four, at the Blue Suit AFB, and have a beauty formation and break (or “pitch-out,” as it was known in the local dialect) in order to dazzle the natives.

The plan was to fly to the Least Coast, land at NAS Cecil, and use their hot refueling pits to gas up without shutting down, which was widely acknowledged to be dangerous to continued flight.  Since Puresome himself had been a local attack puke in a previous life and spoke the language, it was hoped that all would go tickedy-boo.  Once refueled, the division would launch again for a twice-around-Florida before crossing the Gulf to Blue Suit AFB and happiness hour.  So was it written on the flight schedule.

After many strange adventures of briefing, signing for aircraft, downing aircraft, getting new aircraft, Puresome was able to assemble four gleaming F-8’s that had among them a Tacan, a radio, and a wet-compass.  And so they launched into the air traffic control system to do battle.  These reserve fighter pilots were seasoned veterans, and, with the possible exception of being admonished by air traffic control for LT Dirtball being in radar trail instead of with the rest of the formation, the flight East was “aggressively professional,” which meant “Sierra Hotel” in the Fitness Report dialect.

After two hours in the air, the division whoosled into a fan-break of flawless beauty for the contemplation of the attack community.  Refueling on the ground with the engines running allowed time to study the curious activities of Tinker Toy A-4’s and A-7’s, which looked like LTV had fed an F-8 too many Snickers Bars and it had grown up stubby.  Finally, all completed refueling, and the flight section-taxied for take-off.

On the road again, Puresome began to realize that the gallon of coke/coffee/exedrin he had consumed as breakfast was saying “Hi! Remember me?” from his nether regions.  “No hill for a stepper,” thought Puresome, who gritted his teeth and concentrated on not wobbling around too much.

But as that great clock in the sky counted off another 1.0 of flight time, Youthly was fantasizing about hollow legs and trying desperately not to think about the wash of the waves down below in the Golfo de Mexico.  When his wingman started noticing his lead was deteriorating, things were truly serious.

But the money the U.S. government had spent on survival training was not lost on Puresome.  Inventorying the contents of the cockpit and wondering as to the waterproof qualities of his canvass nav-bag, he happened to notice that his knee-board radio frequency card was held in a zip-lock plastic sheath!

Quickly, he passed the lead to his wingman and advised him that he was going to move off from the flight to perform a control check.  Seizing the stick between his knees and shucking the cards from the zip-lock, Puresome began the involved procedure of torso-harness, G-suit, and flight-suit disassembly, as well as the search mission incident to the filling of the bag.

The rest of the flight marveled at the gyrations of the fighter undergoing rigorous control checking.  Finally, it was done: the bag safely sealed and stowed in a corner of the cockpit, and the flight suit, G-suit, and torso harness back in place.  “I got the lead,” snarled Puresome.

The tropical sun shone brightly on acres and acres of polished starting units on the flight line as the flight of four sped toward the break at Blue Suit AFB.  “This is going to be awesome,” Puresome thought as he pitched a kiss toward his wingman and rolled away, pulling on the G’s.  The world outside his cockpit shrunk to a tiny sliver of horizon as he grunted and worked the rudders to stay level.  He had just rolled out downwind, still at the speed of stink, when he remembered the plastic zip-lock bag…..  “Oh, scheisse” he thought.

The advance party of sailors awaiting the arrival of the F-8’s on the transient ramp were done proud as the big fighters fanned out overhead and entered the landing pattern.  Chief Large, who had been in charge of the group, had all in readiness as the Crusaders taxied into the ramp, guided to their parking spots by plane captains.

As Puresome shut his plane down, Chief Large ambled over to ascertain if the current occupant had bent his airplane.  Pulling the Mickey Mouse ear-protector away from one ear, he hollered, “How’s the airplane, Mr. Puresome?”

Looking down from the cockpit, Puresome held out a zip-lock bag filled with amber fluid at arm’s length and hollered back, “4.0, Chief!  Looky! I brought you a new six-G sample bag with some bad JP-5 in it…”

Chief Large jumped out from under the bag with a speed surprising for a man of size.  He wandered off to check on the other aircraft, mumbling unto himself that Flight Deck Hazardous Duty Pay ought to include the ramp.  He wondered, not for the first or last time, how long it might be until Happiness Hour, and, perhaps, retirement.