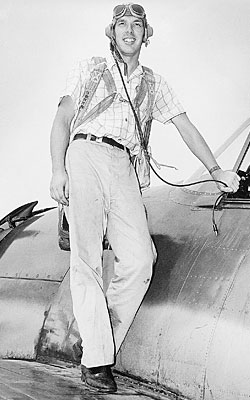 Remembering one of our own:
Those of us at Flight Journal mourn the passing of our regular contributor and close friend, Corky Meyer. It’s a clichÈ to say that he was a one-of-kind, but all who spent even a short time with him would have to agree. Besides having been an important cog in the wheel of history, as a Grumman pilot through WWII and well into the late ’50’s, he was one of the funniest, warmest people most of us have ever met. We always enjoyed his writing because of those exact traits. He put you in the cockpit and let you share the thrills while poking fun at himself at the same time. He’s one of the most enjoyable people we’ve ever known.

We’ve chosen to commemorate his life by presenting the article “Some Days You Should Stay in Bed,” which is a compilation of a number of his articles. Read. Enjoy. And marvel at both the experiences of the man, and the skill and humor of his writing. We’re not likely to see his kind again.

Left: The author on the F6F-3 BuNo 25881óthe prototype for the F6F-5. Note the absence of fire-protection clothing, Mae West, etc. Shortly thereafter, he found out that such a disregard for safety would take sufficient toll to make him become a self-appointed flight-gear-safety person for experimental pilots for the rest of his career.

Come on in and sit down. We‘re going to do some hangar flying with Corky Meyer, Grumman’s legendary test pilot, and hear about a few days when things didn’t go the way he had expected.

The engineers were trying to build the lightest airplane with the biggest motor and still make it capable of surviving carrier landings. To do this, they designed the wings lighter and weaker than normal but intended to shed about three feet on each side should it be overstressed. It could fly back to the carrier and land, even if only one wing separated. The concept worked in testing, and everyone was happy until it hit the fleet.