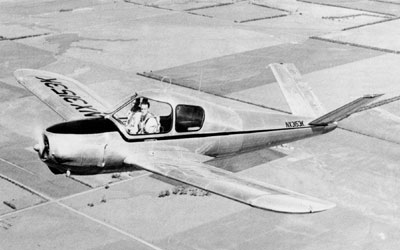 As the tiny plane with the odd-shaped tail taxied toward her, Robin Ragland Smith surprised herself by crying softly. If only her father could see this, she thought. How long he had worked to get this airplane – the one he had built in 1948 with six other men, the only one of its kind in the world – back home.

She hadn’t expected to get emotional, but she cried again when she hugged the plane’s owner, T.J. Balentine, 84, a retired businessman from Copan, Okla., after he climbed out of the cockpit at Yingling Aircraft near Wichita Mid-Continent Airport on a sunny Saturday afternoon.

She thanked him for bringing the plane back to Wichita. “He would be thrilled,” Ragland Smith said of her father. “He tried for many years, as you know, so, thank you so much.”

The plane was an Allied A-2 – an experimental, V-tailed aircraft that her father, Harry Ragland, a former World War II bomber pilot, had dreamed of putting into production with the other men until a fire wiped out their company, Allied Aircraft, shortly after the plane was built.

It will be stored in a hangar at Yingling for the winter, then moved to the Kansas Aviation Museum sometime in mid-May, said Lon Smith, the museum’s executive director.

For the complete story by the Wichita Eagle’s Fred Mann, click here.