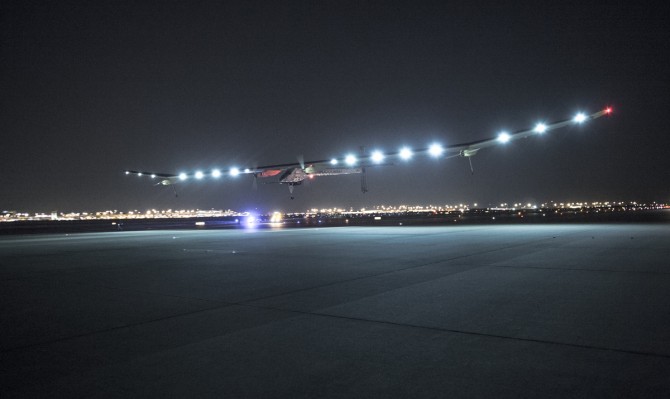 Solar Impulse, the solar-powered airplane of Swiss pioneers Bertrand Piccard and André Borschberg, successfully landed in Dallas-Fort Worth early Thursday, completing its longest leg of the 2013 Across America mission and setting an absolute world distance record in solar aviation of 832 nautical miles.

The previous distance record was also established in Solar Impulse when Borschberg flew 602 nautical miles from Switzerland to Spain in May 2012. The record is now to be submitted to the National Aeronautics Association before it is ultimately awarded by the Fédération Aéronautique Internationale (FAI).

The flight originated Wednesday at Phoenix’s Sky Harbor International Airport when Borschberg took off at 4:47 a.m. Mountain. After 18 hours and 21 minutes in the air, he landed the four-motored aircraft at 1:08 a.m. Central on Thursday at Dallas- Fort Worth International Airport. This is the second of five legs Piccard and Borschberg will alternately fly from California’s Bay Area to New York City.

“This leg was particularly challenging because of fairly strong winds at the landing. It also was the longest flight – in terms of distance – ever flown by a solar airplane. You have to understand that the pilot needs to stay awake for more than 20 hours without any autopilot,” said Borschberg, co-founder, CEO and pilot of Solar Impulse. He  still holds the record for the longest duration ever in a solar powered airplane with 26 hours.

Solar Impulse is organizing a number of events at Dallas-Fort Worth, including an open house. The Friday public event was welcomed with a great success being sold out just a few hours after the opening. Because of the positive response, an additional open house has been set for Saturday, May 25, from 11 a.m. to 5 p.m.. To register, click here.

Piccard will fly Solar Impulse to Lambert-St. Louis International Airport for the third leg of its journey. The departure date will depend on weather conditions.

From a Solar Impulse news release