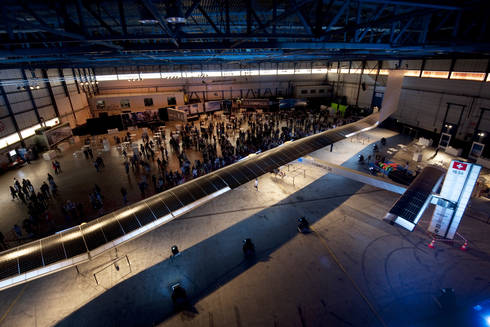 A solar-powered plane with a unique look that took off  Tuesday morning from Moffett Airfield in Mountain View passed over the Golden Gate Bridge just after 2 p.m. The lightweight plane known as the Solar Impulse, which has a wingspan of 208 feet, was about 3,000 feet in the air as flew above San Francisco and the bay Tuesday afternoon, said Alexandra Gindroz, spokeswoman for the Swiss firm Solar Impulse, which owns the plane.

The plane, which weighs only about 3,500 pounds, runs completely on power from the sun drawn from 12,000 solar cells on the craft that send energy into batteries that power propellers running on four electric motors, Gindroz said.

Tuesday’s flight is a technical test run to prepare for a planned cross-country trip beginning in early May. On the first leg of the trip, the plane will depart from the Bay Area and head to Phoenix, Gindroz said.

But the test run is also about something more, Gindroz said. “For us, it’s really a message to fly over the Golden Gate Bridge and the Bay Area,” she said. “It means that we are here and it’s a landmark.”

For the complete story and video by KPIX-TV, click here.