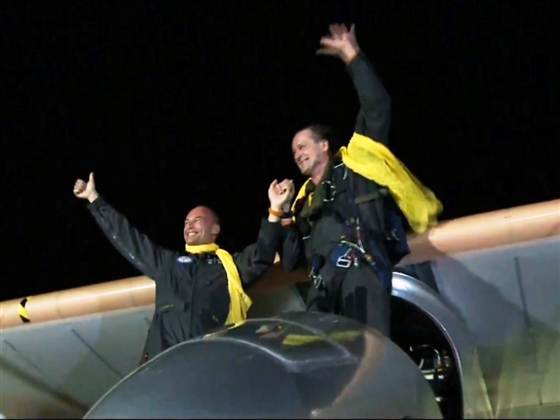 The Swiss-built Solar Impulse airplane ended its two-month-long, solar-powered trip across America with a nail-biter of a flight from Washington to New York on Saturday.

“Maybe if I didn’t have 10 cameras pointed at me, I would cry,” Swiss adventurer Bertrand Piccard, one of the pilots for the coast-to-coast journey, said just before the 11:09 p.m. ET landing at New York City’s John F. Kennedy International Airport.

The extra drama came from the discovery in the trip’s final hours that the ultra-light airplane had suffered an 8-foot-long (2.5-meter-long) tear in the fabric on the lower side of the left wing. Andre Borschberg, who was filling the pilot’s seat for the Washington-to-New York segment of the “Across America” journey, noticed a balance issue with the wings on Saturday afternoon — and pictures taken by a helicopter flying nearby confirmed the damage.

For the complete story by Alan Boyle of NBC News, click here.