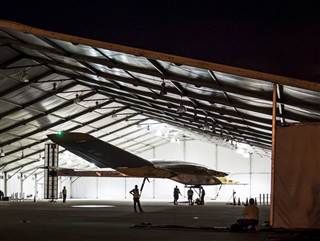 A solar-powered airplane made a smooth trip on Monday from Texas to a stormy part of America – St. Louis, where the Solar Impulse team put a portable, inflatable hangar to its first real-world test.

The third leg of Solar Impulse’s “Across America” odyssey may not have been a record-setting trip like last week’s flight from Phoenix to Dallas-Fort Worth International Airport. But St. Louis could rank as the plane’s most challenging layover to date.

For the complete story by Alan Boyle of NBCNews.com, click here.

Photo by Solar Impulse via Reuters