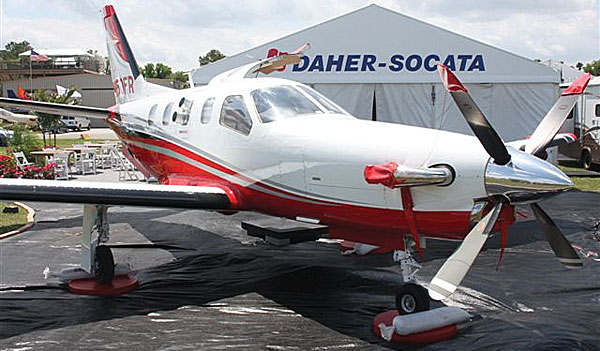 This year marks 100 years of continuous aircraft design and manufacturing by the famous French company Morane-Saulnier, now Daher-Socata. The Morane-Borel monoplane was the company’s very first aircraft; it was put in to limited production as the Morane-Saulnier Type A after the type proved successful in the 1911 Paris-Madrid air race in which Raymond Saulnier and brothers Leon and Robert Morane teamed up. Morane-Saulnier designs made headlines even before WW I: an altitude record of 18,405 feet was established by one Type A, and another became the first aircraft to be flown across the Mediterranean Sea.

At the outbreak of the war, the French military had already been operating the type, and Roland Garros was working on a system to fire a machine gun through the blades of a Morane-Saulnier’s propeller. After this era, the company shifted from mid-wing to parasol-wing designs that characterized most of their aircraft until WW II. The L came first, followed by the agile A1—a competitor of the more stable Spad VII in 1917 (1,210 of them were built). It was in an A1 that Alfred Fronval performed 1,111 consecutive loops in 1928—still a world record today. In the 1930s, the MS.230 trainer—of which more than 1,000 were produced—evolved into the MS.315. Right before the war, the French Air Force was operating the MS.406—a low-wing, monoplane fighter—but it was soon outclassed by the Luftwaffe’s Bf 109s. During the closing stages of WW II, Morane-Saulnier manufactured the MS.500 Criquet, a version of the Fieseler Storch. This aircraft was used by French flying and gliding clubs.

The MS.730 Alcyon was another postwar trainer produced by the hundreds for the Armee de l’Air and Aeronavale, and it set the scene for the company’s first production jet—and first exec jet—in 1953. The MS.755 later became the MS.760 Paris. Many civilian light aircraft followed; the MS.880 Rallye and its variants became the best known as the company first became part of Socata and then French aerospace giant Aérospatiale. By 1978, all general aviation work was done by Socata at Tarbes in southwest France, including the TB-10 Tobago and the similar retractable-gear TB-20 Trinidad. After a flirtation with Mooney in the U.S., the ground was set for a turboprop single design—the TBM.700—which first flew July 1988. This plane was developed to create the sleek TBM.850. An antidote to the rise in popularity of very light jets (VLJs), more than 550 TBMs having been built, 222 of them are TBM.850s and 38 were built in 2010. French industrial conglomerate Daher, whose own history goes back to 1863, acquired a 70 percent stake in Socata in June 2008 from European aerospace giants EADS to become Daher-Socata.— Geoff Jones