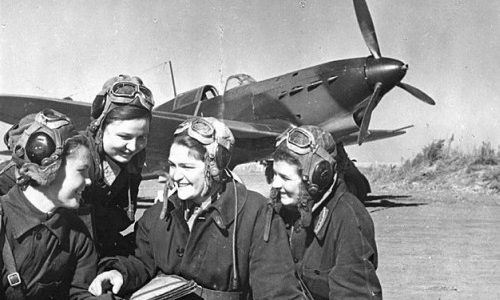 The Nightwitches of the 588th Night Bomber Regiment, were known later as the 46th “Taman” Guards Night Bomber Aviation Regiment, of the Soviet Air Forces. Though women were initially barred from combat, Soviet Premier Joseph Stalin issued an order on October 8, 1941 to deploy three women’s air force units, including the 588th regiment. The regiment, formed by Major Marina Roskova and led by Major Yevdokiya Bershanskaya, was made up primarily of female volunteers in their late teens and early twenties.
These brave Soviet women pilots had old, noisy planes and often the engines would conk out halfway through their missions, so they had to climb out on the wings mid-flight to restart the props. To stop Germans from hearing them and starting up the anti aircraft guns, they’d climb to a certain height, coast down to German positions, drop their bombs, restart their engines in midair and then get the hell out of dodge!

Their leader Bershanskaya flew more than 200 missions and was never captured.