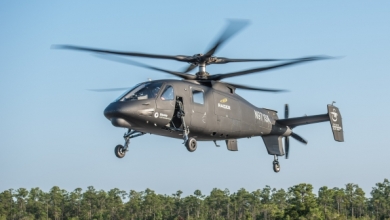 The aircraft is the first of two prototypes of the Raider light tactical helicopter being built under a $200 million industry effort funded by Sikorsky and its supplier partners. This follows the $50 million company-funded X2 Technology Demonstrator, which flew 23 times from 2008-11.

The Raider flew for 1 hr. instead of the 30 min. planned, says Mark Miller, vice president of research and engineering. It completed three takeoffs and landings: forward, rearward and sideward. The aircraft was flown by Raider chief pilot Bill Fell, with X2 test pilot Kevin Bredenbeck as co-pilot.

For the complete story by Graham Warwick of Aviation Week, click here.