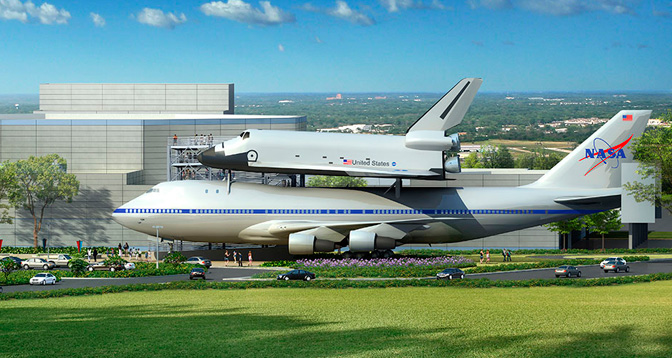 Steven Ramey is standing inside a Boeing 747 fuel tank, and he’s having the time of his life. Pointing to where the aircraft’s 50,000-pound wing attaches to the fuselage, Ramey notes where bolts are being removed.

“This is the first time we’ve pulled off a wing,” the Boeing employee says. “It’s great. We get to come in here, like a bunch of kids, tear it apart and then put it back together.”

The wing belongs to NASA 905, a jumbo jet that ferried dozens of space shuttles from landing sites in California and New Mexico back to Florida. Now stationed at Ellington Field, the aircraft, which is 232 feet long and 63 feet tall, is being disassembled for an 8-mile move in late April to Space Center Houston.

For the complete story by Eric Berger of the Houston Chronicle, click here.