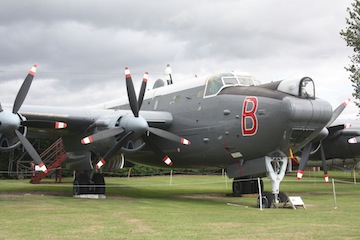 Last operational with the RAF in 1991 and South African Air Force in 1984, and with a design lineage dating back to the Avro Lancaster bomber, the UK-based Shackleton Preservation Trust (SPT) have agreed to work on a program that could see the Shackleton MR.2 WR963 fly again.

Avro’s maritime reconnaissance and airborne early warning aircraft, named after the British polar explorer, first flew at Avro’s Woodford, Cheshire airfield on March 9, 1949, with Avro’s Chief test Pilot “Jimmy” Orrell in command. Designated the Avro Type 696 and designed by a team under the leadership of Roy Chadwick, deliveries of the first Shackleton to the RAF’s Coastal Command commenced the following year. Initially the aircraft was to be called the Lincoln ASR.3, the aircraft a derivative of the Avro Lincoln bomber, which in turn was a development of the Avro Lancaster. With wings, tail, and undercarriage from the Lincoln and a fuselage loosely based on the Avro Tudor airliner, three different variants were built, the Mk1 and Mk2 both with tailwheel undercarriage, and Mk3 with a nose-wheel/tricycle undercarriage. Maritime reconnaissance Shackleton’s were replaced in RAF service by Nimrods, but Mk2 continued in operation alongside the jets in the airborne early warning role.

In 1994, an ex-SAAF Mk3 (1716) was being flown from South Africa to the UK and crashed in the Sahara Desert without any crew fatalities after a double-engine failure. It has been abandoned there. In October 2012 the former Polar Aviation Museum’s Mk2 (RAF WL790) was made airworthy at Anoka County airport, Minnesota for a flight, first to the CAF at Midland, Texas, and then on to the Pima Air & Space Museum, Tuscon, where it has been restored and went on public display in May 2013.

In the UK ,the SPT’s MR.2 WR963 has frequent engine runs (four 2,450hp Rolls- Royce Griffon 57A with 13-foot diameter contra-rotating propellers) at its Coventry base, has been civil registered as G-SKTN as the process of obtaining a Civil Aviation Authority (CAA) Permit to Fly gets under way and a huge fund-raising program kicks in. The aircraft is open to the public at Coventry each Saturday and the Shackleton’s Return To Flight Fund (SRTFF) is collecting money through the Friends of 963 Society (For more information, please email dawnswoods2002@yahoo.com)