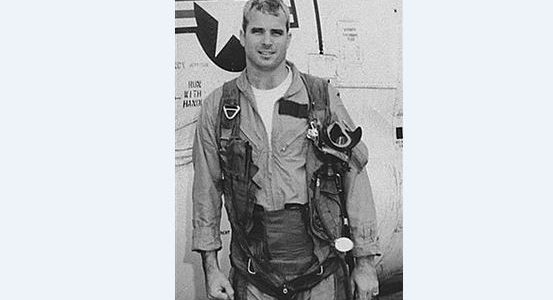 Senator John McCain’s remarkable record of leadership embodies his unwavering lifetime commitment to service. The son and grandson of distinguished Navy Admirals, Senator McCain graduated from the Naval Academy in 1958, and served as a Naval aviator for 22 years, including in North Vietnam during the Vietnam War.

On October 26, 1967, during Senator McCain’s 23rd bombing mission over North Vietnam, a missile struck his plane and forced him to eject, knocking him unconscious and breaking both his arms and his leg.

Senator McCain was taken as a prisoner of war into the now-infamous “Hanoi Hilton,” where he was denied needed medical treatment and subjected to years of torture by the North Vietnamese. He spent much of his time as a prisoner of war in solitary confinement, aided by his faith and the friendships of his fellow POWs.

When he was finally released and able to return home years later, Senator McCain continued his service by regaining his naval flight status.

His last Navy duty assignment was to serve as the naval liaison to the United States Senate. He retired from the Navy in 1981. His naval honors include the Silver Star, Bronze Star, Legion of Merit, Purple Heart, and the Distinguished Flying Cross.

Senator McCain was elected to the U.S. House of Representatives from Arizona in 1982 and elected to the United States Senate in 1986. He was the Republican Party’s nominee for president in the 2008 election.

Over the course of his career, Senator McCain served as Chairman of the Senate Committees on Indian Affairs, Commerce, Science and Transportation, and most recently, Armed Services.

Senator McCain is survived by his wife, Cindy, seven children and five grandchildren.
He will be laid to rest at the U.S. Naval Academy Cemetery in Annapolis, Maryland.