The Southern California Wing of the Commemorative Air Force in Camarillo, CA has recently begun a full overhaul of one of its most prized aircraft, the Grumman F8F-2 Bearcat. Though Bearcats are somewhat common warbirds in the world of aircraft restoration, CAF SoCal’s airframe, BuNo 122674, has a truly unique history and has flown in one of the most unique environments in its afterlife as a museum flyer.

The American Southwest is a mecca for retro vehicle restoration of all kinds; whether they be hot rods, motorcycles, or aircraft. Though the region’s dry and warm climate treats metal and machines more gently than other parts of the country, vintage planes can only be flown for so long before massive rework is required; and CAF SoCal’s crew is up to the challenge of getting their Bearcat back in the skies.

The history of Grumman’s last piston-engine fighter is a fascinating one. Building on lessons learned in blood with Wildcats and Hellcats battling the Japanese in the Pacific Theater, the Long Island, NY aircraft manufacturer set out to build a carrier-based, air supremacy fighter for the U.S. Navy and Marine Corps’ eventual mainland assault of the Japanese home islands. The first airframes began rolling off the assembly line in late 1944, but the dropping of the atomic bomb brought the war to an end before any F8F’s made it to front line service. Regardless of combat operations ending, the Navy still saw a need for the high-performing fighter, and over 1,000 were built by the time the last one left the factory in 1949. Bearcats subsequently saw combat with the French Air Force during the French-Indochina War and became a favorite in the world of competitive air racing. 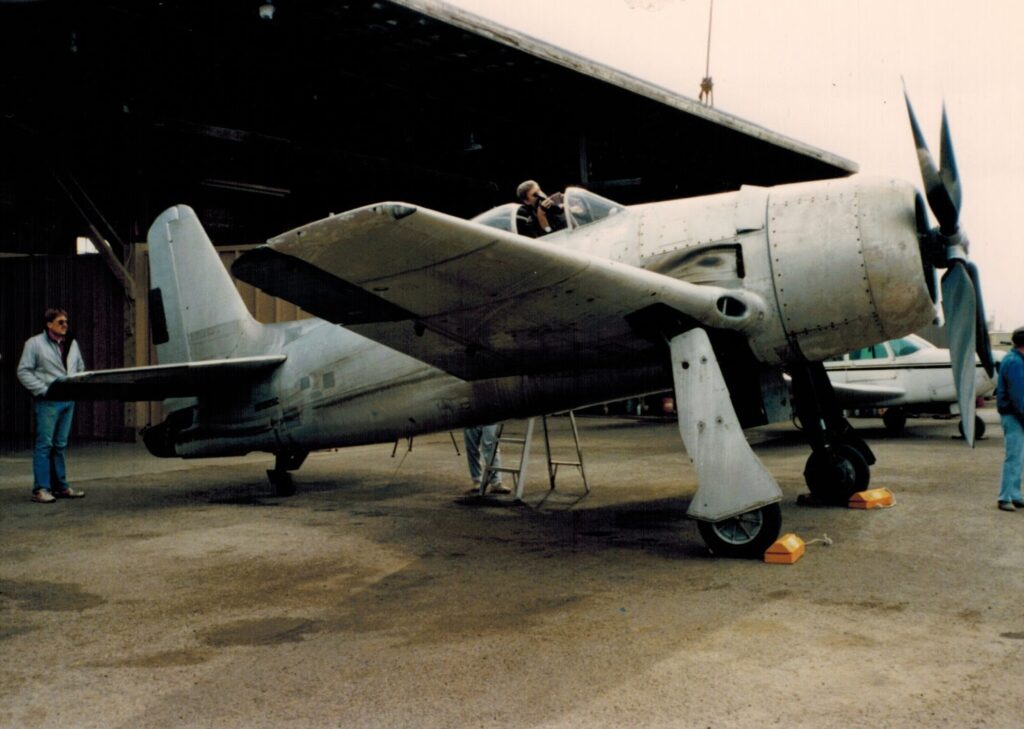 CAF SoCal attained their F8F in a manner somewhat common in the community of restored warbirds. Built in 1948, the airframe was quickly declared surplus during the massive postwar military draw-down and wound up in an aircraft boneyard in Marana, Arizona. The boneyard (now Pinal Airpark) has a bizarre history of its own; starting as the largest pilot training center during WWII, abandoned after the war and used for aircraft storage, it wound up being utilized by the CIA as a covert air operations headquarters for missions in Southeast Asia during the Vietnam War. The unused Bearcat was eventually bought by a wealthy individual who used it as a very extreme sports car, and subsequently donated it. After winding up in Texas, then the Planes of Fame Air Museum in Chino, CA, it finally found its permanent home with CAF SoCal in 1991.

Eighteen months of restoration work brought the airframe to its first flight in 1993; a particularly impressive accomplishment when taking the fact into consideration that the aircraft hadn’t been flown for about eight years prior to arriving in Camarillo. The Bearcat quickly joined the airshow circuit and was loved by fans throughout the country. 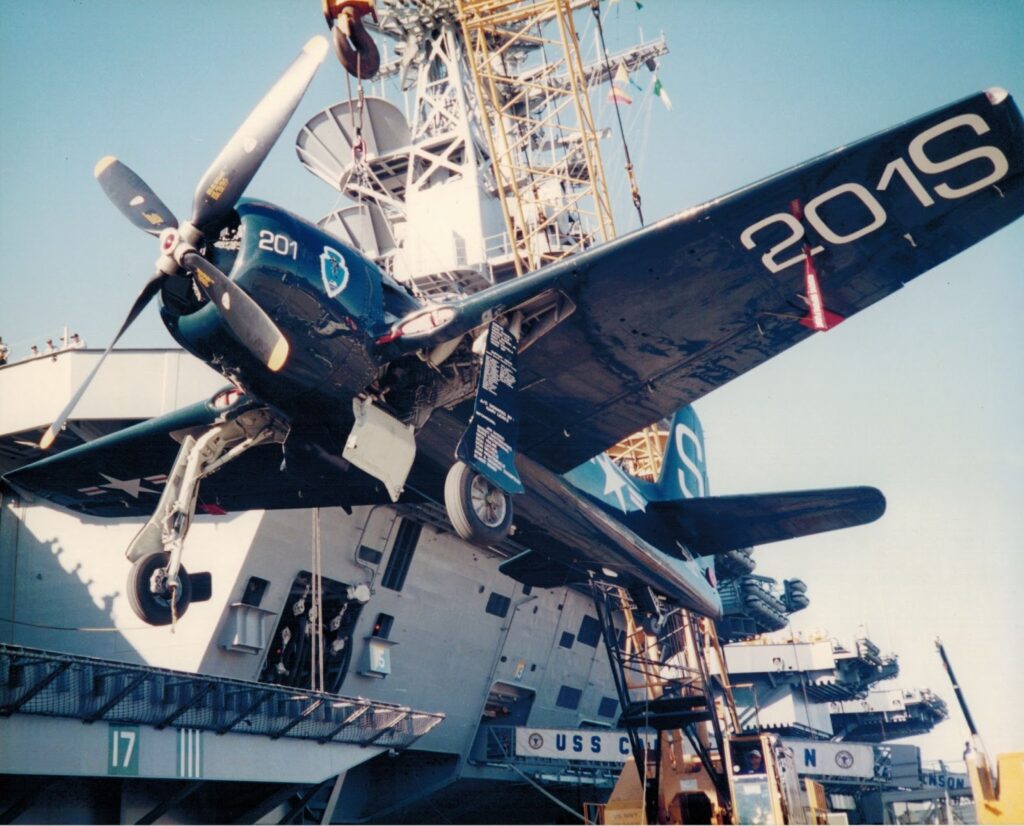 Though it never saw any action, launching from the deck of an aircraft carrier steaming into harm’s way during the Second World War, BuNo 122674 finally got to sea under CAF SoCal’s stewardship in the mid-90s. She was craned onto the USS Carl Vinson (CVN-70), homeported at the now-closed Naval Air Station in Alameda, CA. Participating in a commemoration of the 50th anniversary of WWII and San Francisco’s Fleet Week ‘95, the Vinson took position in the bay, turned into the wind, and made its flight deck ready for aircraft launch operations. Unlike the ship’s contemporary air wing of F-14 Tomcats, S-3 Vikings, EA-6B Prowlers, and E-2 Hawkeyes–all of which require steam catapults to launch–the Bearcat merely spun up its Pratt & Whitney radial piston engine and conducted a deck run, taking off under its own power as it was designed to do fifty years earlier. The depth of this accomplishment was not lost on Navy brass; CVN-70’s ships log reports, “Breaking new ground in Naval Aviation Safety, CARL VINSON safely conducted the first ever launch and recovery of aircraft inside San Francisco Bay.” 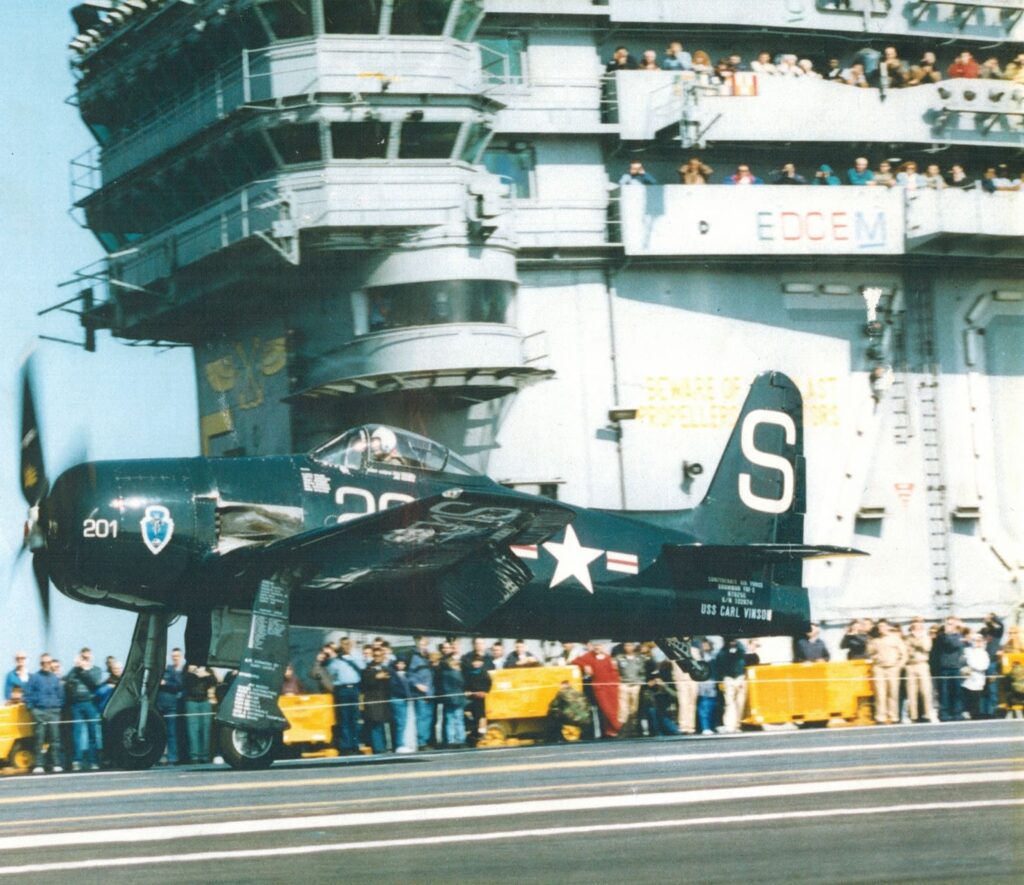 Though it never saw any action, CAF SoCal’s Grumman F8F-2 Bearcat finally gets the opportunity to launch off the deck of an aircraft carrier almost fifty years after it was built. Photo provided by CAF SoCal.

On flying the Bearcat, CAF SoCal aviator Gary Barber simply states its “fantastic.” He should know, having accumulated 300 hours piloting the F8F throughout the country for air shows and demonstrations. Gary had a stint flying F-86 Sabres in the U.S. Air Force and has since flown several of the museum’s other airframes, to include: T-6 Texan, C-46 Skytrain, F6F Hellcat, and P-51 Mustang; so his ranking of the Bearcat as one of the best planes he’s flown is obviously not without merit. 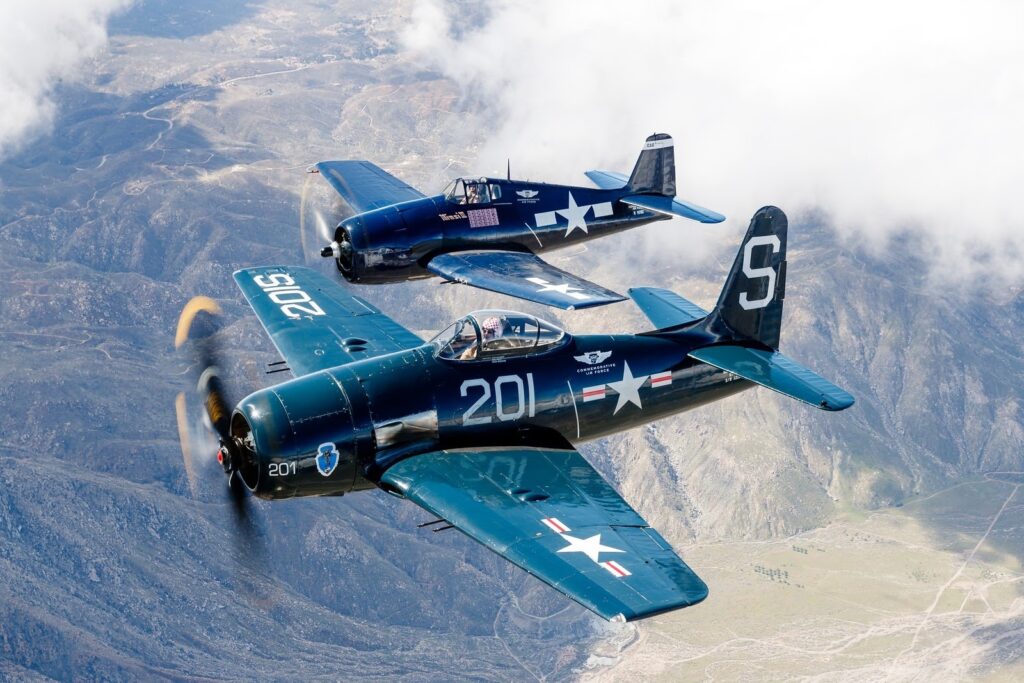 The Bearcat in formation with its Grumman predecessor, the F6F Hellcat. Airframe lineage is noticeable, as well as the bubble canopy’s superior view. Photo by Arash Afshari.

After almost 30 years of wear and tear as a flying museum bird, Bearcat crew chief John McMahon determined a complete overhaul was required. Amongst much else, “the engine was burning too much oil and there were suspicions of corrosion” he states, bringing the aircraft to its current state in CAF SoCal’s maintenance hangar. Seeing an airframe stripped down and dismantled to the degree of Camarillo’s F8F is a stark reminder of the level of work required to keep these birds flying. It is also a testament to the professionalism of the volunteer crews that put in the man-hours. 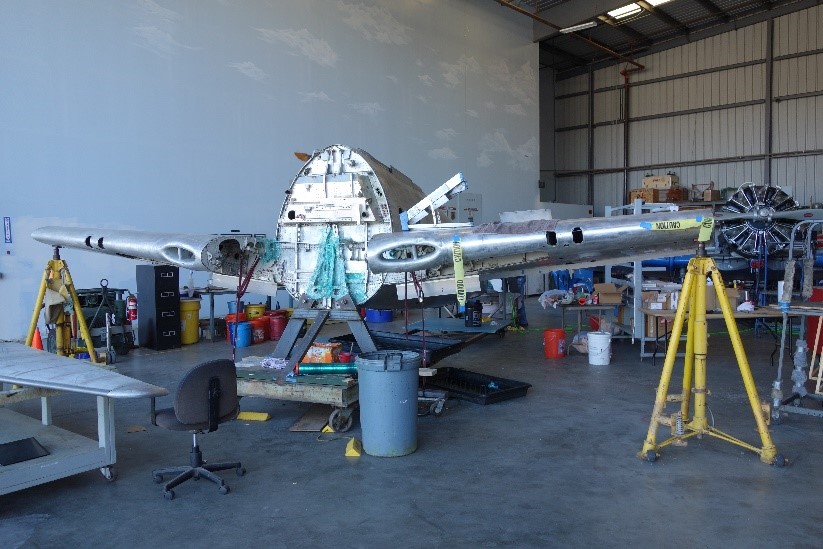 Current projections put the completion of maintenance over a year out, but CAF SoCal’s team, local enthusiasts, and air show attendees everywhere will be excited to see the Grumman F8F-2 Bearcat flying once again. No one knows if it’ll ever grace the deck of a modern supercarrier again, but as BuNo 122674 has already proven, never say never. 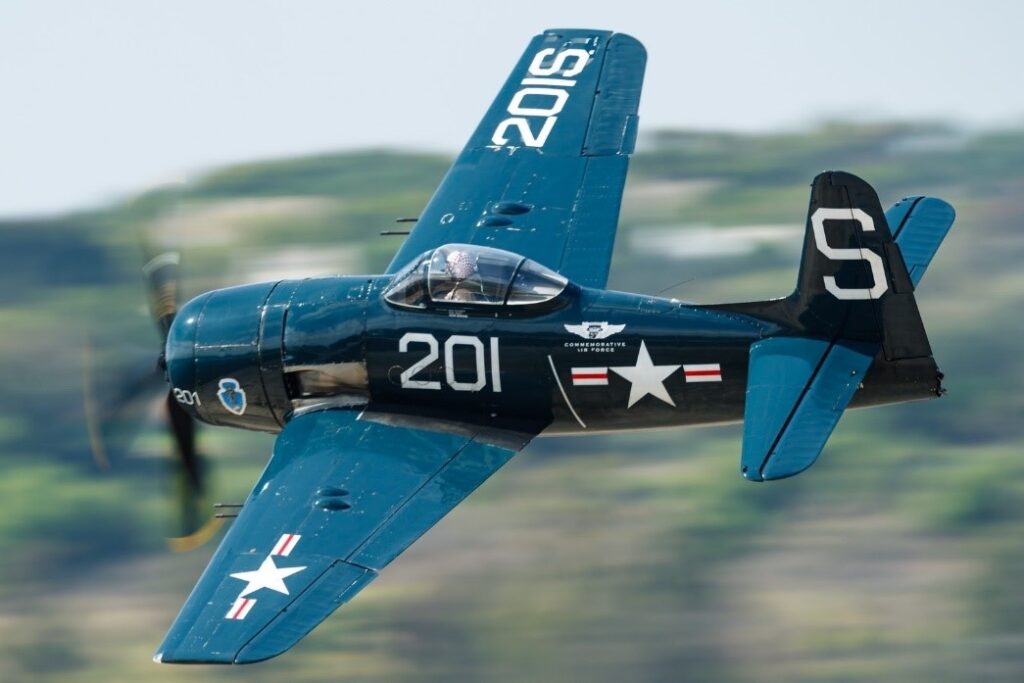 CAF SoCal’s Bearcat zooming past fans at an airshow. Photo by Arash Afshari.