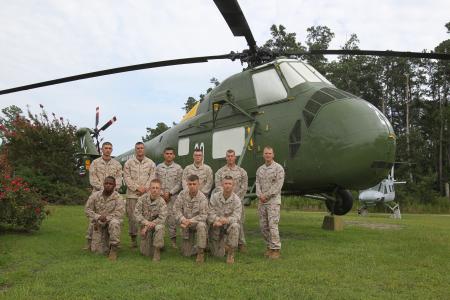 Throughout the ages many works of art have depicted victories and scenes of valor in the face of danger and almost-certain death.

The aviation memorial near the main gate of Marine Corps Air Station New River in Jacksonville, N.C., joins legions of such art, including mosaics showing the Battle of Kadesh in Mesopotamia and statues depicting soldiers in the Normandy invasion of World War II. One notable difference is that the Sikorsky UH-34 Seahorse memorial is an actual aircraft converted into a work of art that immortalizes the service of the aircraft model and the crews that flew it.

To keep the memorial immortal, Marines of Marine Aviation Logistics Squadron 29 repainted the UH-34 to prevent rust and other decay from starting. The effort that started in May came to a close in a ceremony at the memorial, Aug. 6.

Gunnery Sgt. James Hutchinson, MALS-29 airframe staff noncommissioned officer in charge, said the aircraft was painted with the scheme used on the UH-34 in the 1960s pre-Vietnam era. The only difference is a clear gloss coat that helps reflect sunlight that damages the other coats of paint.

The Seahorse started its Marine Corps service in 1955. In 1962, Marine Medium Helicopter Squadron 362 deployed with the UH-34 to South Vietnam to defend against the Viet Cong. The last UH-34 retired in August 1969, when the Marine Corps introduced the CH-46 Sea Knight. Despite more than 40 years of retirement, memories of the UH-34 are still alive with the veterans who flew them.

Lance Cpl. Jason Lawrence, MALS-29 airframe mechanic, said veterans who operated the UH-34 would come by during the restoration, tell their war stories about the aircraft and thank them for their efforts. The airframe mechanic also said he developed an attachment to the work of art.

“It’s a great feeling,” said Lawrence. “It’s great to be finally done with it. I can drive by and say it’s looking good now instead of driving by it tomorrow and seeing it half stripped and the next day with half a coat of paint on it. Now it’s like it’s got my name on it.”

He continued to say that even after future generations repaint the aircraft, his mark will still be there.

Hutchinson said he though highly of the Marines who worked on the project. Each Marine put in about 240 hours of work into the aircraft. Some of the volunteers came from other sections in MALS-29, such as ordnance and avionics, so several hours of the project was on-the-job training.

“I couldn’t have asked for a better crew of Marines to not complain about the heat or the weather and just absolutely put 100 percent heart and love for the Marine Corps, the history of the aircraft and those that came before us and gave us the opportunity to be able to serve our country,” said Hutchinson. “This is what ‘Semper Fi’ stands for.”