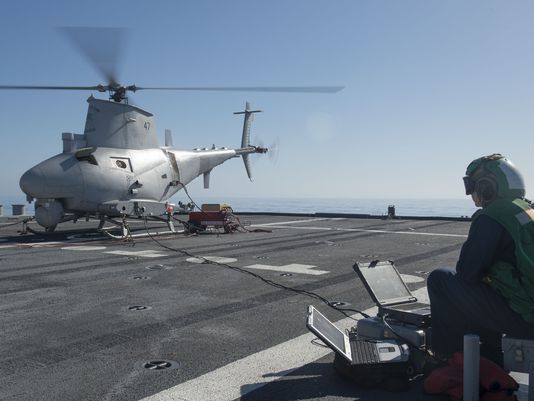 An MH-60R Seahawk helicopter and MQ-8B Fire Scout are deploying together on the same ship — a first for manned and unmanned integration aboard a surface combatant.

On Monday, a detachment that included one Sikorsky Seahawk and one Northrop Grumman Fire Scout from the “Magicians” of Helicopter Maritime Strike Squadron 35 deployed aboard the littoral combat ship Fort Worth as it begins a 16-month rotation in the Western Pacific based out of Singapore.

The 24-sailor aviation detachment left San Diego and will spend approximately four months underway before it is relieved by a second detachment from the Magicians. Detachments 3 and 4 will follow until the ship’s 16-month rotation is complete. Officials said Fire Scouts and Seahawks will deploy on a similar four-month schedule on other vessels.

For the complete story by Joshua Stewart of NavyTimes.com, click here