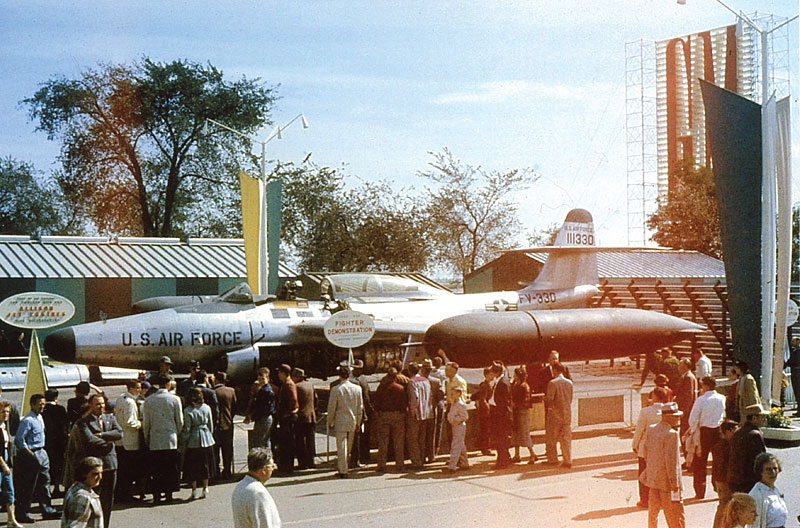 In September 1955, General Motors presented its free “World’s Fair of Power” on Chicago’s lakefront. This event was named Powerama and was put together to exhibit to the public examples of everything the company was then currently producing. These included diesel locomotives, giant, earth-moving equipment, a diesel-powered submarine moored nearby, heavy-duty military vehicles, an oil drilling rig, and jet engines. Mixed into the 250 exhibits and displays were three aircraft: a Martin B-61 Matador, a Vought SSM-N-8 Regulus (both being guided missiles powered by Allison J33 engines), and a Northrop F-89D Scorpion flown in from the 438th Fighter Interceptor Squadron based at Kinross AFB Michigan.

The F-89D was cabled down and a blast fence was built behind it. If you can believe it, the port engine was run up several times a day and its afterburner lit! No one in the crowd surrounding the aircraft or any of the nearby Air Force maintenance personnel seemed to wear any ear protection. One of these airmen would stand by the nose of the aircraft when the engine was in operation with a box of tissues, pulling them out one at a time and tossing them into the air in front of the intake. The tissues would then disappear very rapidly down the intake, impressing the crowd.

The question is: how did this frontline aircraft arrive at the site? She could not have landed at nearby Meigs Field with its too short 3,900-foot runway. Her record card has her at O’Hare Field in August 1955 with no exact day listed. It would have been possible to tow her from O’Hare to the site on then-existing streets on a quiet Sunday morning, but there is no mention of such a trip in any of the four main daily papers. It is possible that she was disassembled and then reassembled at the site, and then this was done again to get her back to O’Hare. It is very doubtful the squadron commander or his maintenance officer would have willingly signed off for one of their aircraft to be taken apart and put back together twice. The record card indicates that the aircraft did not return to Kinross until January 1956, so it is possible that she was dismantled twice and that it took three months to get her back into a safe flying condition.

Can any reader recall any information on how this Scorpion was moved from O’Hare to the Chicago lakefront and back in August and September 1955? Email us at flight@airage.com with any info!