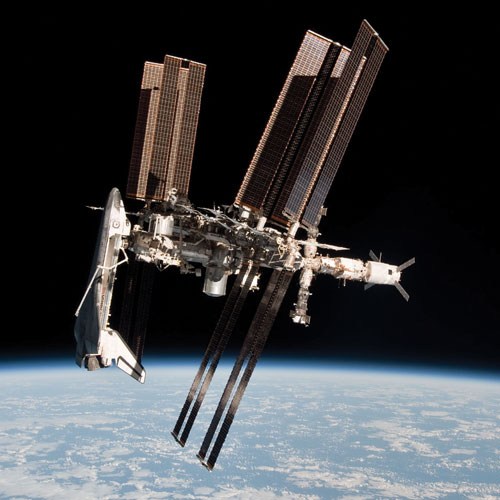 Photographs of the International Space Station (ISS) are taken from a space shuttle, and photographs of a space shuttle are taken from the ISS. So how was this extraordinary photograph taken? This photo of the Space Shuttle Endeavour was taken by astronaut Paolo Nespoli on-board the Russian supply ship Soyuz TMA-20 after it undocked for its return trip to Kazakhstan in Central Asia, where it subsequently landed by parachute later that day on May 23, 2011. Upon landing, the three astronauts onboard the supply ship—Nespoli (European Space Agency, or ESA, astronaut), Dmitry Kondratyev (Russian cosmonaut) and Cady Coleman (NASA astronaut)—had completed 159 days on orbit aboard the ISS.
As I write, the last space shuttle mission—STS-135—will have been flown by the Space Shuttle Atlantis. This photograph was taken during the next-to-last mission flown, STS-134. In total, since April 12, 1981, the space shuttle fleet flew 135 Space Transportation System missions. It was during these missions that the ISS was assembled on orbit. The first section of the ISS, the Zarya Control Module, went on orbit November 20, 1998. The last section, recently delivered by Atlantis, went on orbit in July of this year.
The now retired fleet of space shuttles is currently on their respective ways to various air and space museums: Enterprise to the Intrepid Sea, Air and Space Museum in New York City; Discovery to the Smithsonian’s National Air and Space Museum Udvar-Hazy Center in Virginia; Endeavour to the California Science Center in Los Angeles; and Atlantis to the Kennedy Space Center Visitor’s Complex in Florida. —Steve Pace