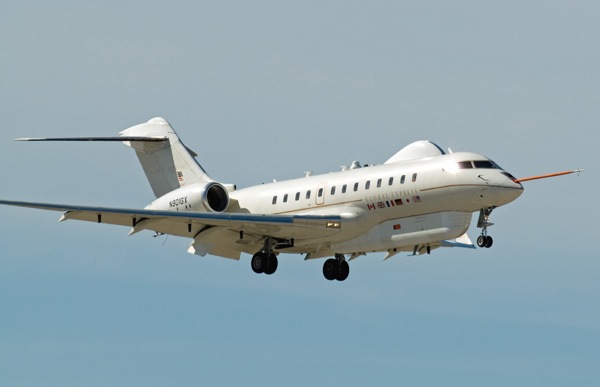 The 451st Tactical Airborne Gateway, a unit based at Kandahar Airfield in Afghanistan flying the Northrop Grumman E-11A, was re-designated during a ceremony on March 13. It is now the 430th Expeditionary Electronic Combat Squadron.

“This deployment is a great opportunity for these warriors to serve their country, and being deployed here during the time this unit converts to a squadron makes it extra special,” said Lt. Col. Robert Finch, the 430th EECS commander.

The mission of the E-11A, which is based on the Bombardier Global Express executive jet, provides radio connectivity across the battlespace for airborne and surface operators. The unit, which has been operating in Afghanistan since 2009, includes pilots from a variety of different airframes across the Air Force, including the F-15 Eagle, F-16 Fighting Falcon, F-18, A-10 Thunderbolt II, C-17 Globemaster III, C-20, C-21, C-37, C-130 Hercules, KC-10 Extender, KC-135 Stratotanker, RC-135, E-3, U.S. Air Force Academy gliders, B-1 Lancer and the B-2 Spirit.

“I continue to be amazed at the quality of Airmen we have in our Air Force, regardless of the aircraft they fly or the career field they serve in,” Finch said. “The diversity in this squadron is truly a blessing. The greatest advantage is that it allows us to be able to incorporate the best practices out of each community, which helps make this an outstanding squadron.”

Finch also praised the maintenance team, which is made up of Northrop Grumman contractors.

“They’ve done a fantastic job at keeping these jets airborne with a mission that requires around-the-clock maintenance,” he said.

“It’s really neat that we can do this given the context of this day and age,” he said. “Right now we’re on the precipice of drawdown and redeployment operations, so to stand up a squadron in this kind of environment is really a privilege. In many ways it speaks to the quality and excellence this unit has exhibited while they were the TAG.”

“The 430th has always been activated when the nation needs us most,” Finch said. “We must continue to brainstorm new ideas of how we can provide additional capabilities, allowing ground and air warriors to integrate with each other. I challenge you to continue to innovate and develop new tactics that can allow us to use our capabilities even more effectively.”