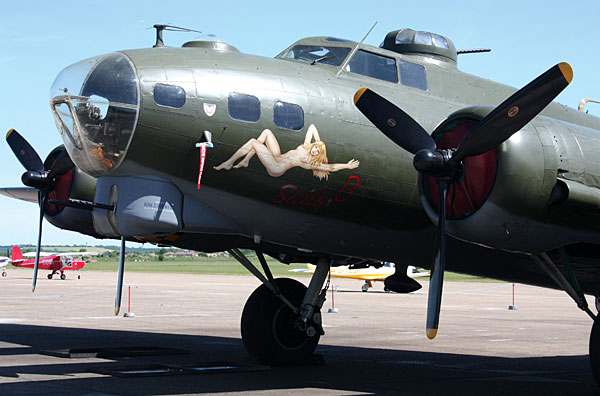 In 1954, it was sold to the French Institut Geographic National based at Creil air base near Paris, with a fleet of other B-17s that remained active on survey and mapping work until 1972. Acquired by Ted White and Don Bullock in the UK, it was flown to England and made its public airshow debut at Biggin Hill in 1975. In 1979, Ted and his Danish-born partner Ellinor “Elly” Sallingboe formed B-17 Preservation to support the operation of the aircraft and to raise funds for this purpose. The B-17G, now UK civil registered as G-BEDF, acquired the name by which it is best known in honor of Elly’s surname, after Ted White’s unexpected death in 1982.

Sally B has suffered many issues since then, technical and financial, so in 2000, the B-17 Charitable Trust was established to help keep the aircraft airworthy; engine issues have been a particular problem with the aircraft. Nonetheless, perseverance pays off, and Sally B remains airworthy, based at Duxford, Cambridgeshire, and continues to thrill airshow crowds in the UK and throughout Europe. More info at sallyb.org.uk.
—Geoff Jones