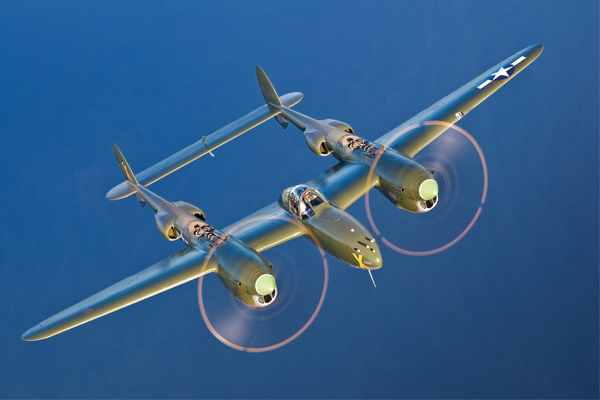 By the time newly minted U.S. fighter pilots entered WW II in late 1941, they faced a Japanese adversary whose pilots had been flying combat since 1937. Not only were these “flying Samurai” pilots old hats, but they also flew a trump card in the form of the Zero. As the rays of the Rising Sun extended over the vastness of the South Pacific, the two things that stood in their way of reaching the Australian shores was a jumping-off point near the southern tip of New Guinea and the untested, untrained and out- gunned fighter pilots of the Army Air Corps. Follow along as a farm boy turned fighter pilot slugs it out with the Japanese in a life-and- death struggle to hold New Guinea at all costs.

December 6, 1941, was a day I would never forget. After months and months of enduring the various rants and complaints of my Army Air Corps instructors, most of whom had shouted at me from the backseats of PT-17s, BT-14s and AT- 6s, I turned the tables on them as silver wings were pinned to my chest. A brand-new second lieutenant, I carried a set of papers that proclaimed I was to be sent to Selfridge Field in Michigan to learn how to fly fighters. Less than a day later, my whole world, along with everyone else’s, was turned upside down.

We received word that the Japanese had bombed a place called Pearl Harbor; I thought it was up near Alaska. What did I know—I was just a farm kid from Wisconsin. I realized it was serious when they told us to report back to base, and I knew these were desperate times when they sent me to Florida to learn how to fly P-40s with the 49th Fighter Group. But by Christmas of 1941, having yet to sit in a P-40 let alone fly one, our airplanes were crated, and we were told we were being sent to California for deployment to a combat area; the military could not afford to wait to train us while the Japanese were ravaging the Pacific.

On February 1, 1942, after 21 days at sea, our convoy landed at Melbourne, Australia. Most of us were overzealous and cocky. Some in the group thought the Japanese were all inferior pilots, wearing thick glasses, and flying airplanes that couldn’t handle the simplest turning maneuvers. It didn’t take us very long to realize that we were the inferior ones—in pilots and aircraft. After a blindfold checkout and a few prayers, at last I got to fly a real fighter, a P-40N Warhawk. But by April 1942, after a whooping 24 hours total time in the P-40, never firing its guns or learning air-to- air combat maneuvers, I was reassigned to a newly formed fighter squadron, the 80th.

The 80th Fighter Squadron was part of the 8th Fighter Group that also included the 35th and 36th FS. Instead of P-40s, we were assigned P-39 and P-400 (British versions with a 20mm cannon) Airacobras. Built by the Bell Aircraft Corporation, the P-39 was the first tricycle-geared fighter ever produced. It had a door on each side that opened like a car door and windows that rolled up and down. Once inside the roomy cockpit, the forward visibility was excellent. The Cobra had plenty of guns, too; a 37mm cannon (20mm on the P-400) that fired through the propeller shaft, a pair of nose-mounted .50-caliber machine guns synchronized to fire through the propeller arc, and four .30-caliber machine guns, two on each wing. On paper, the P-39 appeared to carry quite a punch, but in the air it wasn’t worth the paper it was written on. We struggled to get them up to 18,000 feet. Needless to say, the Japanese fighters and bombers operated well above us, and they held the upper hand on when and where they wanted to fight.

To read more, click the link to open the PDF: Ruff Stuff