At first glance, rockets and balloons would appear to be entirely separate technological species that would have little to do with one another. A modern rocket is a highly complex feat of engineering and, if powerful enough, can escape the Earth altogether. A balloon is as simple as simple gets (within reason), but even modern research balloons can’t get higher than about 20 miles. But what if the two were combined?

In combining the two, the balloon acts as a passive booster by hoisting the rocket high enough that it gives the rocket a head start before it is fired, thereby allowing it to take off in the upper atmosphere—less air resistance and friction to worry about. In the 1950s, the U.S. government investigated the concept for upper atmospheric and outer space research. Inevitably, perhaps, the
results were called “rockoons.”

By 1952, the U.S. Navy was launching 100-foot-wide balloons, each with a single-stage rocket dangling by a tether beneath it. The Navy was using Deacon rockets, some of which were 10 feet long and 8 inches in diameter.

When the balloon reached its maximum altitude, the lowering air pressure tripped a relay that automatically ignited the rocket, which then reached an altitude of some 40 miles, well above most of the earth’s atmosphere. The rocket used solid fuel.

A Geiger counter or ionization chamber in the nose would then measure and analyze cosmic radiation in its natural envi­ronment, free of most of the interference from Earth’s atmosphere. The findings were radioed back to Earth, and the spent rocket came down somewhere in the oceanic firing range.

By 1957, the U.S. Air Force was also trying out rockoons, under the name of “Project Far Side” (no…it predated Gary Larson’s cartoon strip), with a budget of $750,000 ($6.6 million in today’s dollars). The rocket assembly was larger than that used by the Navy and had four stages, but it was still solid fuel.

The first stage consisted of four Recruit rockets, the second stage was a single Recruit, the third had four smaller Arrow 2 rockets, and the final stage was a single Arrow 2. All told, the entire assembly had a combined thrust of 220,000 pounds, compared to, for instance, the later Saturn V moon rocket, which had an overall thrust of 7,500,000 pounds.

Rather than being fired automatically by lowering pressure, as with the Navy units, a radio command from the ground would ignite the four-stage assembly, which would shoot up straight through the balloon. The launch facility was located on the island of Eniwetok in the Pacific Ocean.

The Air Force balloons were much larger than the ones used by the Navy, some being 200 feet in diameter. The heavier rocket required a much larger balloon, which was, in fact, the largest balloon constructed up to that time. It was made out of thin polyethylene (2ml thick) and used helium for lift.

Project Far Side had six planned launches, with the first occurring September 25, 1957. The first five launches were failures. The project was dogged by bad luck: balloons failed, the rockets malfunctioned, or the instruments didn’t work.

But the sixth launch succeeded. It took off on October 22, 1957, just 18 days after the Soviet Union successfully launched humanity’s first artificial satellite, Sputnik I, on October 4.

The sixth assembly reached a height of about 4,000 miles, with a scientific payload of only 3 1/2 pounds. The previous American record was 650 miles, using the Jupiter-C, a much larger rocket—too large for any available balloon to carry.

The four-stage rocket reached a maximum speed of at least 17,000 miles an hour, orbital speed, but since the trajectory was straight up, it did not go into orbit. It, instead, fell back to Earth, burning up from air friction—but not before radioing its findings.

One of the Project’s more enthusiastic members claimed the data thus gathered was more valuable than that from Sputnik I.

There was also talk of trying it out with a fifth stage, in hopes of reaching the Moon, though nothing came of it. Sending instruments and people to the Moon would have to wait for rockets far greater than even the Jupiter-C, and atmo­spheric research leapfrogged well past rockoons with the advent of viable satellite technology. 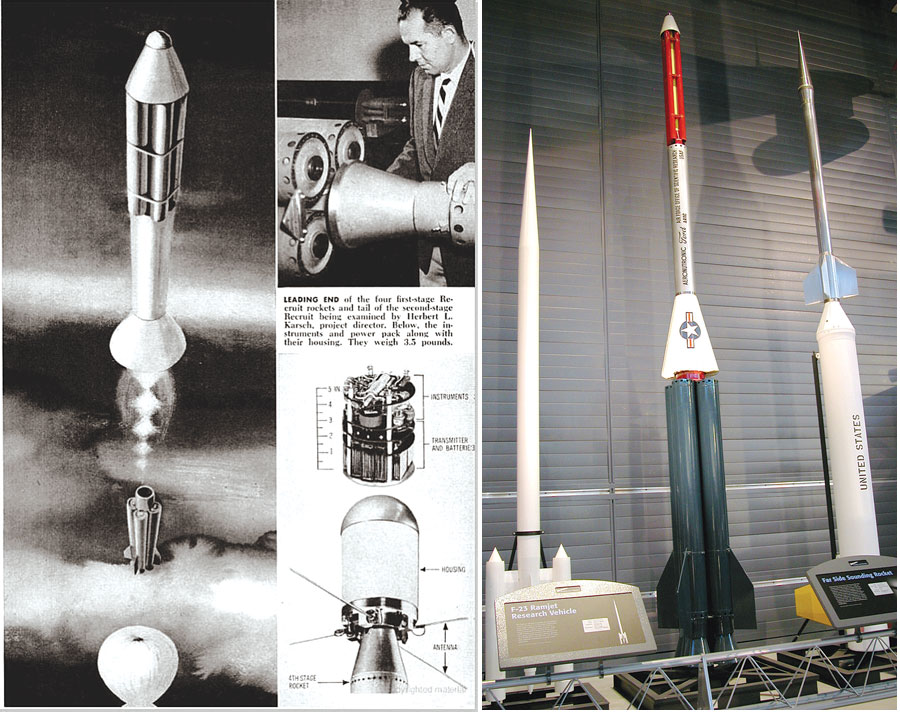 In the golden age of space exploration and ever-growing booster rockets, Project Far Side used balloons to defeat the lower atmosphere and bundled rockets to act as staged boosters. (Photo courtesy of Wikimedia Commons)