Back in 1991, my friend Jim McRae and I decided to drive from Vancouver to Reno to see the 28th National Championship Air Races and the associated air show. The races featured many well-known pilots, three time winner Lyle Shelton in Rare Bear, Bill Destefani in Strega and Skip Holm in Tsunami. A totally new design, the Pond racer made its debut.  This composite twin designed by Burt Rutan would be flown by Rick Brickert. This unique aircraft powered by two 6 cylinder automotive racing engines fostered hopes of defeating the much larger war bird racers. The daily airshow included such as then current notables as Jimmy Franklin and Johnny Kazian, Joann Osterud, Leo Loudenslagger and of course Mr. R.A. (Bob) Hoover. 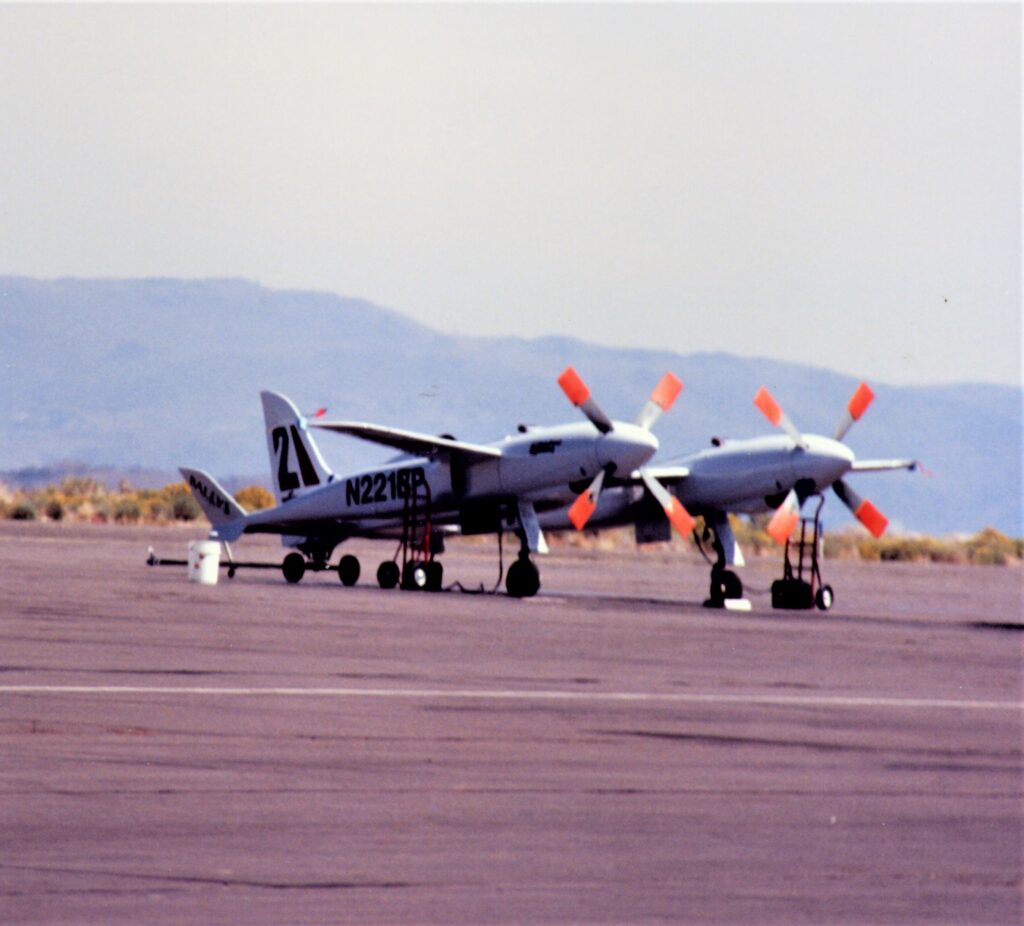 Jim, a longtime volunteer at sports car races and a frustrated race driver at heart drove his new Honda Civic while I navigated. This was the same division of talents that we had refined during long cross country trips in his Champ. There was slightly more trepidation in the Honda than in the Champ however.

We drove straight through to Reno and checked into the Peppermill and slept the sleep of the just and exhausted. I had stayed in the Peppermill numerous times in the past while in Reno on business and while the hotel had the feature of familiarity and good rates, it was also the unofficial hotel for some of the race teams.

After breakfast the next day we bussed out to the race venue at Reno Stead Airport where we purchased the necessary passes including the obligatory “pit pass.” It was as necessary to get into the pits as breathing for two aviation nuts. Besides that, we knew one of the unlimited racers and who knew what might come out of that.

A long time friend of Jim’s was a former BC Lions football player and warbird owner, Jerry Janes. Jerry and his crew had brought his #20 Hawker Sea Fury, “Cottonmouth” for the race week and as luck would have it, his pit was next to Lyle Shelton’s #77 Bear Cat – Rare Bear. Lyle was to win the Unlimited race on Sunday and set a new race record of 481 mph in the process. 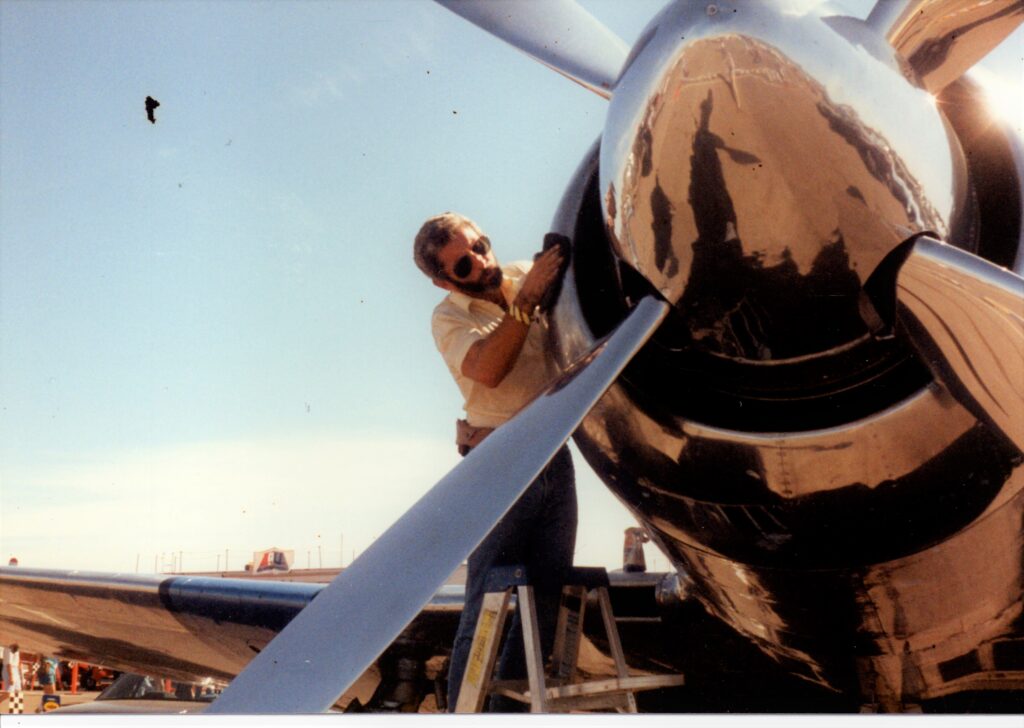 Jim wangled our way on to Jerry’s pit crew and we were promptly given the “vital” task of polishing the Sea Fury. Polishing this beast to a high gloss was to make a huge difference in the win potential. The Sea Fury is a big plane and the task was made more challenging by the amount of oil deposited by the 2700 hp Curtis Wright 3350-26WD. This task occupied us for most of the weekend. Very little other work was needed as according to the crew chief Russ Popel, “you have to come ready to race, otherwise stay home.”  With the original 2480 hp Bristol Centaurus engine, the Sea Fury had a top speed of over 400 mph and with the more powerful Wright it should be competitive in the Bronze and maybe even in the Silver races This particular aircraft was one of 35 built for the Royal Canadian Navy and still had the wing folding feature and I would be reminded of this fact much later in the weekend.

The race weekend proceeded with the usual suspects winning their respective classes. Gold on Sunday was won by Rare Bear followed by Strega and Tsunami. The highly touted composite Pond racer suffered an engine fire and pilot Rick Brickert declared a mayday, pulling up and out of the race. This surprised no one in the Unlimited pits as they, the Pond crew, had managed to alienate most of the unlimited teams and so there was little sympathy for their misfortune. John Muszala flew “our” #20 Sea Fury to a six place finish in the Silver race as Jerry had come down with a bug on Saturday. 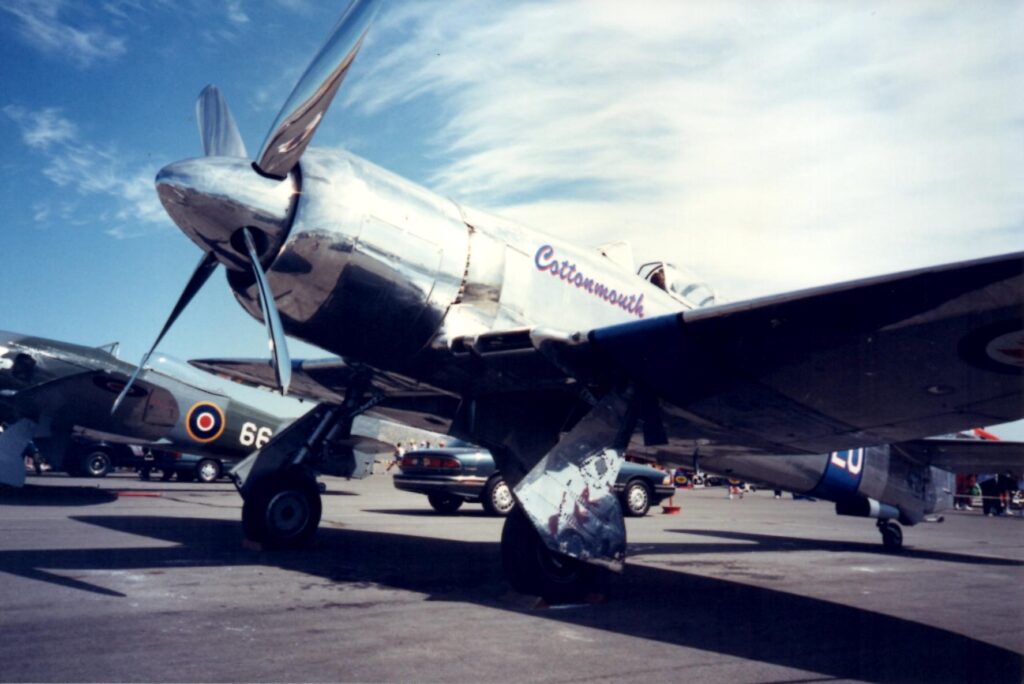 Late Sunday after the end of the Gold race as I was focused on cleaning the last of the oil off the side of the fuselage, I was surrounded by the noise and bustle of the crew as they packed up preparing to go home. Suddenly it started to get dark and I detected movement overhead. I was startled and dropped to the wing walk, fearing that something was about to fall on me. That was not the case as it was just the outer wing panel folding up and over me. Sheepishly I got up and finished my task, thankful that no one had spotted my brief moment of terror.

The ride home on the following Monday must have been uneventful or perhaps I was too tired to care. It was an exciting weekend and an exceptional opportunity to see the races from the inside.