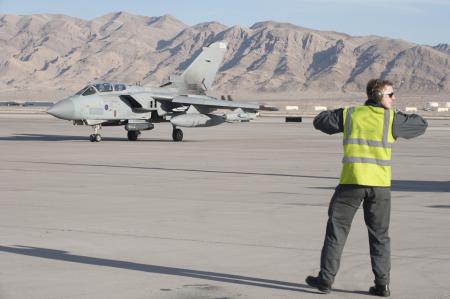 The latest iteration of the U.S. Air Force’s premier air-to-air combat training exercise kicked off Jan. 27 as both allied and U.S aircraft took to the skies to do simulated battle over the Nevada Test and Training Range.

Allied aircrews from Great Britain and Australia joined U.S. warfighters in the continued effort to maximize combat readiness, capability and survivability in a contested-degraded environment during Red Flag 14-1 hosted by the 414th Combat Training Squadron.

“Red Flag, more than anything else, is an opportunity,” said Air Force Maj. Nathan Boardman, Red Flag 14-1 team chief. “It’s a time for weapons systems [professionals] from many different platforms to get together and learn to integrate their abilities in a very difficult environment.”

Featured this time around will be an increased focus on the seamless integration of space and cyber assets to prepare for the ever-evolving, non-kinetic threat. Boardman, a space and missile officer by trade, is the first non-pilot team chief in Red Flag history.

“We’re always looking for new ways to integrate non-kinetic capabilities into the exercise,” Boardman said. “The training we can provide is just second to none.”

Since its establishment in 1975, Red Flag participants have used Nellis AFB’s 2.9 million acre NTTR as a one-of-a-kind arena for realistic air combat training. Under the Air Expeditionary Force concept, joint and allied military members deploy to Nellis AFB to make up the exercise’s “Blue Force,” and engage in a three-week simulated air war against the “Red Force,” made up of U.S. Airmen trained in the use of enemy tactics organized by the 57th Adversary Tactics Group.

The scope of the exercise brings an accelerated pace to operations base-wide, and Nellis AFB Airmen are up for the challenge.

“It’s one of those unique challenges that you really look forward to — a time to shine,” said Master Sgt. Ron Eckman, 57th Aircraft Maintenance Squadron production superintendent. “It’s an opportunity to put our best foot forward in representing the Air Force and make sure our sister forces and joint partners receive the highest quality training.”

About 3,200 people, more than 100 aircraft and 66 squadrons will be participating in the first Red Flag since sequestration. Red Flag 14-1 is set to conclude Feb. 14.