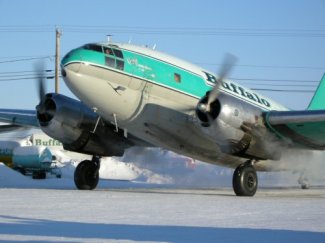 One of the last flying C-46 Commandos was likely written off in an off-airport landing in Canada’s Northwest Territories on Friday.

A Buffalo Airways Commando suffered engine trouble on a cargo flight from Yellowknife to Norman Wells. The crew tried to divert to Deline, NWT, but apparently didn’t make the airport. The aircraft was belly landed in a bushy but flat area next to a road and was extensively damaged. None of the four crew members was hurt.

Buffalo Airways, which was the star of a History Channel reality show for six years, operates three Commandos and is one of the last commercial operator of the type. The company didn’t comment on the mishap.

For the complete story and video by Russ Niles of AVweb, click here.