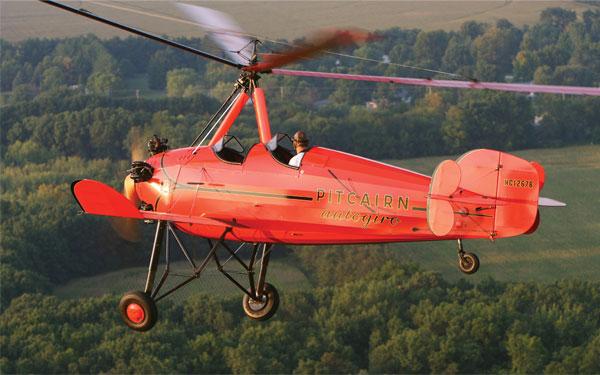 A piece of Jurassic aviation is reborn

“This is a real prehistoric monster in flight. Once the helicopter was built, these autogiros became dinosaurs,” stated the late Jack Tiffany of Spring Valley, Ohio, at the time, co-owner (with Jim Hammond of Yellow Springs, Ohio) of the Pitcairn PA-18 N1267B (c/n G-65), the only example of the type flying in the U.S., when it first flew after its lengthy restoration.

“It is a bizarre feeling, especially the first time, it was like being swept off the ground by a giant pterodactyl,” added test pilot Andrew King, sticking with the Jurassic theme.

In 1929, after creating a successful line of rugged mail planes, Harold Pitcairn gambled on the future of the autogiro. Buying the U.S. production rights from Juan de la Cierva, its Spanish inventor, Pitcairn established the Pitcairn Autogiro Company, in Willow Grove, Pennsylvania. 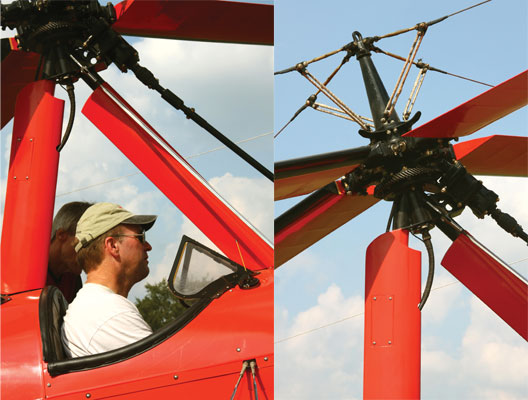 Above Left: Andrew King giving the lowdown on the autogiro, while seated in the front seat of the craft. Getting in and out of the Pitcairn is not an easy task, as you have to squeeze in between the rotor posts in order to slide into the seat. Bailing out during an in-flight emergency is pretty much out of the question. Above right: The rotor head is not as complicated or as fragile as it seems. It has very little in common with today’s helicopter rotor heads. The pre-rotator gearbox, seen on the right, allows the rotor blades to start spinning at low speeds, prior to the takeoff roll. This allows for the rotor to stabilize and reduce the takeoff run. Its engineering gave some troubles to Juan de La Cierva, the gyro’s inventor, until he came up with a new design allowing the rotor blades to flex in flight.

Designed to be “every man’s autogiro,” the two-seat PA-18 was a small machine powered by a 160hp Kinner engine. Only 19 were sold.

Built in 1932 at the Willow Grove, Pennsylvania, factory of the Pitcairn Aircraft, Inc., N12678—now N1267B—became the personal aircraft of Harold Pitcairn. He flew it until it was sold in 1935 to Anne Strawbridge, of Mount Airy, Philadelphia, Pennsylvania.

On the eve of WW II, Strawbridge refused to sell the Pitcairn to the Pitcairn-Larsen Company so it could be converted to PA-39 specifications for use by the British military under the lend-lease program.

Her move assured survival of the PA-18, which eventually found its way into Al Letcher’s collection, resurfacing in the late 1990s. Jack Tiffany ended his lifelong quest for an autogiro when he acquired it in 1999.

“It was a basket case. Finding the parts was a real treasure hunt. We just sent out for pieces all over the country and in Canada.”

In 2008, after eight and a half years of efforts by Tiffany’s Leading Edge Restoration team, the Pitcairn was ready for its first flight in New Carlisle, Ohio. 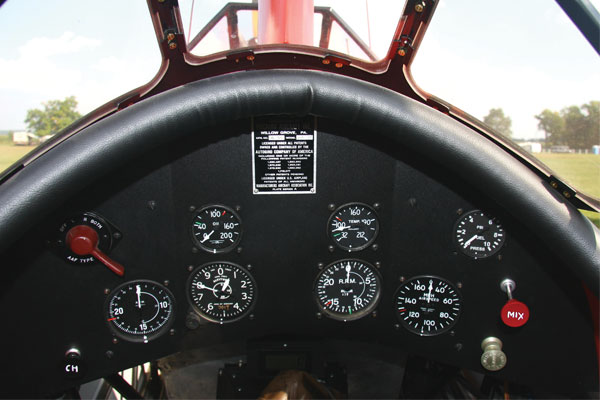 Above:  The instrument panel of the Pitcairn is very much standard for its time, with one addition; a rotor tachometer red lined at 140rpm. Below: Since the pilot does not have direct control over the rotor head and blades, the craft is controlled via its standard set of airplane controls: rudder, elevator, and the ailerons. The rotor, being fixed in angle of blade incidence and angle of rotor head, acts more like an extra wing. The PA-18 cruises at about 80mph, while its rotor spins at 100rpm. 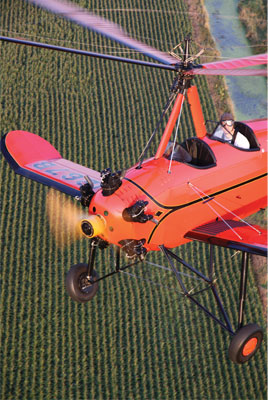 Andrew King, antique pilot extraordinaire, was chosen as the test pilot and took the autogiro aloft on July 10. The first flight was “pretty anticlimactic.”

However, a later adjustment of the rotor blade angle resulted in their partial destruction, as well as significant damage to the tail and rudder, which kept Leading Edge busy over the winter.

The Pitcairn was ready again in the spring of 2009, and Andrew rediscovered the long-forgotten intricacies of flying this unique “ceiling fan.”

“It flies pretty well once you are above 5 feet off the ground. The critical phases are the takeoff and landing.  On landing, you cannot allow for any drift, which means no more than 2 or 3mph of crosswind component.

“If you do it right, you can hover at about 5 feet, get the stick all the way back, and it would settle in a slow vertical descent, pop on the ground, roll 20 feet and stop.”

The autogiro is now part of Kermit Weeks’ collection in Polk City, Florida, and flies only on rare occasions.

Text and Photos by Gilles Auliard