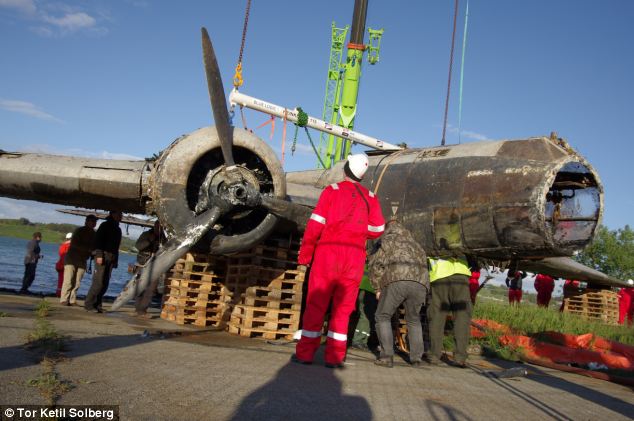 By JAMES WHITE and TOR KETIL SOLBERG/ Courtesy of www.dailymail.co.uk/

This is the moment a rare World War Two German float plane was raised from its saltwater grave virtually intact – almost 70 years after it sank.

The twin-engined Heinkel He-115 torpedo bomber was hoisted out of the water by engineers and divers in a recovery operation in a fjord near Stavanger, Norway.

Now there are hopes the plane will be restored to its former glory and may one day fly again despite it sinking 120ft down to the silty sea floor in 1942 after it was damaged during a botched water landing.

The decision to attempt to recover Heinkel 8L+FH was made after its discovery in 2005 during sonar-equipment testing by the Norwegian Mapping Authority.

Divers found the aircraft, along with two bombs, which were removed and later destroyed.

The condition of the plane is considered to be remarkable, owing to it having lain in low-oxygen silt in a part of the fjord where currents are minimal.

After a fundraising effort by enthusiasts and sponsorship from local firms, volunteers were last month able to raise it from the depths leaving it suspended below the surface from a barge.

It was then transported to the shore in Hafrsfjord by tugs and crane-lifted out of the water.

Before the final lift divers spent several hours washing out silt from within the aircraft to reduce the weight and the risk of the plane breaking apart when it was moved.

Oliver Scott, 31, a British oil worker who witnessed the recovery, said: ‘It was extraordinary to see plane emerge from the water looking as if it was only lost yesterday.

‘It was in remarkably good condition, you could see the swastika on the tail plane and a machine gun still had a belt of ammunition attached.’

Recovery workers then took the plane to Sola Airport in Stavanger where aircraft museum workers dismantled it into five sections before placing it in a freshwater tank where it will remain for two years.

The museum is already restoring a number of rare wartime aircraft, including a Messerschmitt BF-109G, an Italian Caproni bomber and a German Arado trainer, in addition to a BMW engine identical to the ones originally fitted to the Heinkel.

Remnants of silt and saltwater will be removed during the process, preparing it for further restoration in the same hanger from which it operated during World War Two.

Purchased by the Royal Norwegian Navy Air Service from Nazi Germany in 1939, the bomber was later used in the ultimately unsuccessful battle against German forces.

The occupying Nazis then commandeered the plane, using it to bomb Allied shipping, reconnaissance and to escort its own vessels.

The mid-sized, twin-engined float plane was returning from a convoy escort mission off Jæren when it lost a float on landing and overturned on 29 December 1942.

None of the aircrew were lost, and the Germans were able to salvage the starboard engine and floats before the bomber sank and came to rest upside-down just off Prestøya island, less than two nautical miles from its base.

A further three ‘Norwegian’ He-115s have been located in the Trondheimsfjord farther north, although these have been said to be in a comparatively poor state.

Hafrsfjord was the scene of an epic Viking naval battle in 872 A.D., which according to most history books was a direct precursor to the unification of Norway, and has previously yielded all manner of artefacts from the Viking era.

HEINKEL HE-115: SEAPLANE, BOMBER AND RECONNAISSANCE