It happened twice in the same morning: The same question (more or less) was asked about World War II wristwatches. My question was first. We had just received a raft of e-mailed WW II images concerning watches from two of our most appreciated archivists: Stan Piet and Jack Cook. As I was going through the images, a question popped into my head and I fired it off to Jack Cook as a challenge.

[Above: A photo from Jack Cook (of 1st Lt. John and his 43rd FS P-40M) answered the upside-down-watch question.]

“Jack,” I said, “here’s a tough one for you. I wear my watch with the face on the inside of my wrist, rather than the outside, and have since I was a teenager. I started doing this because I read that P-40 pilots did that because of the way that the landing-gear handle worked; they were constantly ruining watch crystals. Being an easily impressed youngster, I started wearing my watch that way. Have you ever seen anything having to do with that?”

About five minutes later, I got the image (at right) from him. Question answered. Just before I received the photo from Jack, however, I got a note from Betty Nero, our art director.

Betty said, “My dad always wore his watch with the face inside his wrist, rather than outside. He said he started doing that during flight training in WW II so that he could read his watch without removing his hands from the controls. Is that common, or was it just him?”

Betty and I have worked together and been good friends for going on 25 years, and I kidded her for never noticing that I wore my watch the same way.

There are two points to be made here, the first being that not once in my life has anyone said anything about wearing a watch in a reverse fashion. It’s just not something anyone cares about. Then, oddly enough, the subject had come up twice in a single hour.

The second point is that it took only one e-mail and a few minutes for our ace photo sleuths to come up with a photo that proves that my ever-weakening memory was correct. None of us should have been surprised because they’re constantly doing that. We’ll say, “We need photos of a Belch Fire Mk IV (not the later and more common Mk IVa) while it was operational on the lower Slobbanian front in April of 1943,” and they find it. Amazing! Our archivists—specifically, Stan Piet and Jack Cook, along with a few others—are the lifeblood of this magazine. With some digging, we can usually come up with the words, but the old photo-worth-a-thousand-words thing is especially true when it comes to aviation.

In this issue’s article on pilots’ watches, for example, we were trying to illustrate the concept of hacking, when all the leadership watches are synchronized. Bingo! Stan fires one off to us. What are the odds that in the heat of battle, someone actually took a photo of hacking taking place? And what are the odds that someone—in this case, Stan Piet—can locate that specific image amid the millions of photos taken during WW II? Simply amazing!

It’s a cliché that a photo is a snapshot in time, but when that time is three-quarters of a century gone, a single photo is so much more than that. It can answer questions, raise questions, or both, but the facts concerning either case are frozen in the image. What were they wearing? How was the airplane marked? What does the background reveal of the operations at that instant: Were rockets mounted? Did they have bombs? Were there long-range tanks? All of us can question an author’s accuracy, but photos are always factual. They never lie. The trick is finding the right one at the right time to illustrate a given fact. 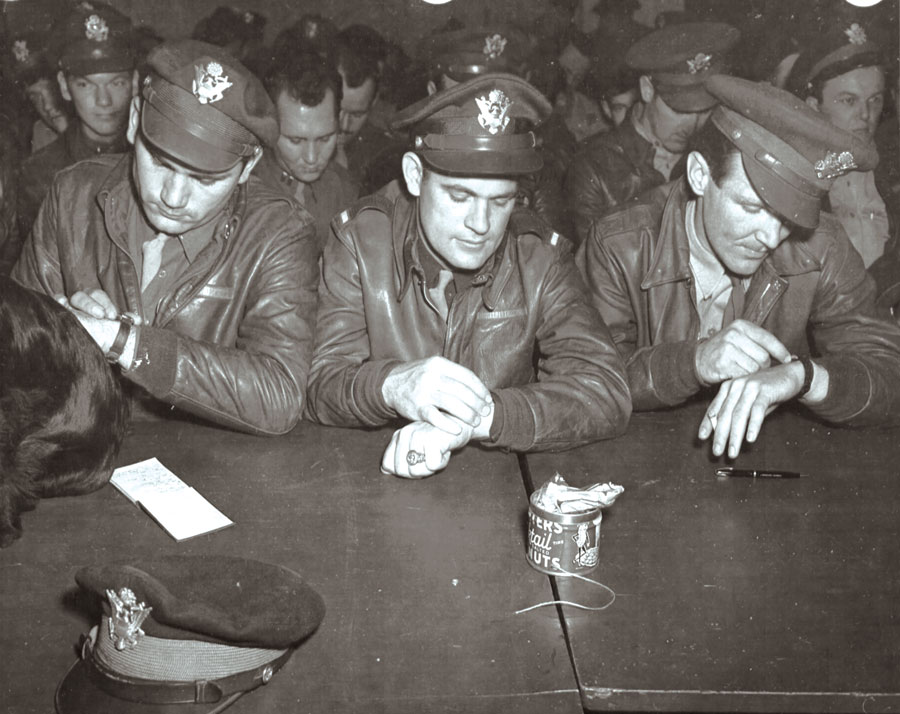 When asked, Stan Piet forwarded not one photo of synchronizing watches (hacking) but half a dozen!

So here’s to the photo archivists, the least appreciated souls in the world of aviation journalism.