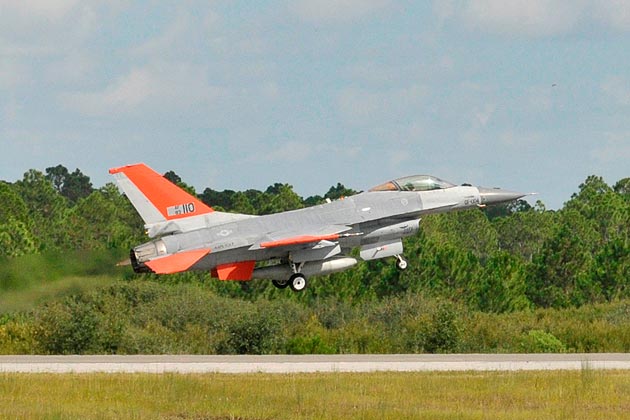 The Lockheed Martin F-16 Fighting Falcon is familiar to airplane enthusiasts as the nimble American jet fighter, in service since the 1970s, with a nose like a heron with a severe underbite. Last week saw the maiden flight of the QF-16, which is just an F-16 with one modification: no pilot inside.

Drones are everywhere these days, from battlefields to toy stores and music videos, but most are slow, relatively underpowered, and valuable only because they can stay in the air for long periods of time or because they’re cheap. This QF-16, on the other hand, is a drone with an afterburner that can fly at one-and-a-half times the speed of sound. In its first test flight from Tyndall Air Force Base in Florida, the plane executed a barrel roll as well as a “split S” — a (very fun-sounding) move in which the plane flips over onto its back and then does half a loop so it ends up headed, right-way-up, in the opposite direction — before executing a perfect landing back at the base.

Six formerly mothballed F-16’s have been retrofitted into QF-16’s, according to Boeing spokesperson Michelle Shelhamer, and next week they’ll be flown — by actual pilots sitting inside them — to their new home at Holloman Air Force Base in New Mexico.

For the complete story by Drake Bennett of Bloomberg Businessweek, click here.