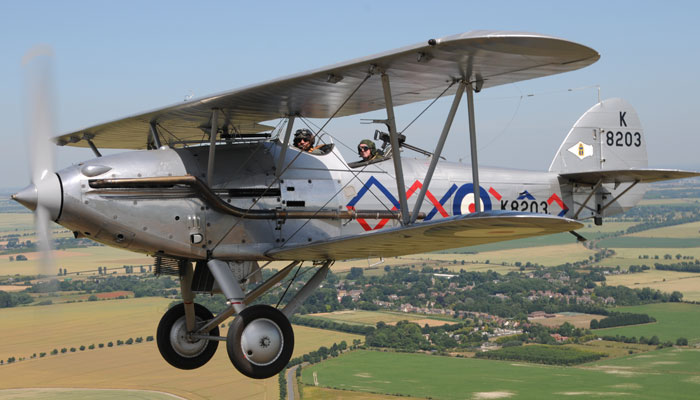 The Hawker Demon was a two-seat fighter developed from the highly appreciated Hawker Hart light bomber. The Demon, which first flew in February 1933, was very similar to the Hart externally, but was powered by the supercharged Kestrel IIS V12 (precursor of the mighty Merlin), which gave it better performance at high altitudes than the Hart. The Demon was the first two-seat fighter operated by the Royal Air Force after World War I, and was the last two-seat biplane fighter manufactured in significant numbers. It was soon outclassed by the new generation of monoplane fighters entering service in the mid to late 1930s.

The Demon was built by both Hawker and Boulton Paul Aircraft. It entered full service in 1933 with No 23 Squadron.

A total of 305 Demons were built, most for the RAF with 64 sold to the Royal Australian Air Force. Beginning in 1936, aircraft from Boulton Paul were equipped with a hydraulically operated shield in the aft cockpit and were known as Turret Demons. The shield was needed because the high speed of the aircraft was such that the rear gunner had difficulty maneuvering the gun against the slipstream. In response, the Demon was given a basic Frazer-Nash turret. It consisted of a protective shield, hydraulically powered, which greatly improved the rear gunner’s accuracy. However, when the turret was pointed to the side, it introduced enough yaw that it badly affected the accuracy of the two forward fixed guns.

The Demon equipped seven regular squadrons and five squadrons of the Auxiliary Air Force. Four RAF squadrons served overseas, as in 1935 Nos. 23 and 41 Sqn. went to Middle East and Nos. 64 and 74 Sqns. were formed at Heliopolis, Greece, and Malta, to support the Abyssinian crisis of 1935-1936. The Demon remained in front line service until late 1938. A handful were still in service through the early 1940s with the RAF in secondary roles and in bombing and gunnery schools.

The only Demon currently flying is privately operated by Demon Display Ltd. in the UK and is a regular performer on the British airshow circuit.

Demon K8203 was among the last 37 built by Boulton Paul Aircraft Ltd. of Wolverhampton and was delivered to No. 1 Aircraft Servicing Unit on October 27, 1937. Initially assigned to No. 64 Squadron at RAF Church Fenton, it was transferred to 25 Sqn. at RAF Hawkinge in mid-1938.

Replaced by the Gladiator, the Demon was assigned to No. 9 Maintenance Unit at RAF Cosford and No. 9 Air Observers School (later renamed No. 9 Bombing & Gunnery School) at RAF Penrhos in Wales. That was K8203’s last operational station until it was struck off inventory on September 28, 1940, and became a ground training aid for No 1 Service Flying Training School at RAF Netheravon. K8023 was finally disposed while with No. 413 (Aldershot) Squadron of the Air Training Corps, during 1943. Luckily, the Demon’s rear fuselage survived in storage at RAF Museum depot at Cardington, and was sold to civilian hands in 1991. SkySport Engineering Ltd. restored it to flying condition, and after more then 35,000 man hours and 18 long years, Demon K8023 returned to the sky on June 23, 2009 piloted by Stuart Goldspink. It was painted in the color scheme it wore while serving with No. 64 Squadron at RAF Church Fenton in 1937.

Armament: A single rear .303 in Lewis Gun with two .303 in Vickers machine guns in the nose