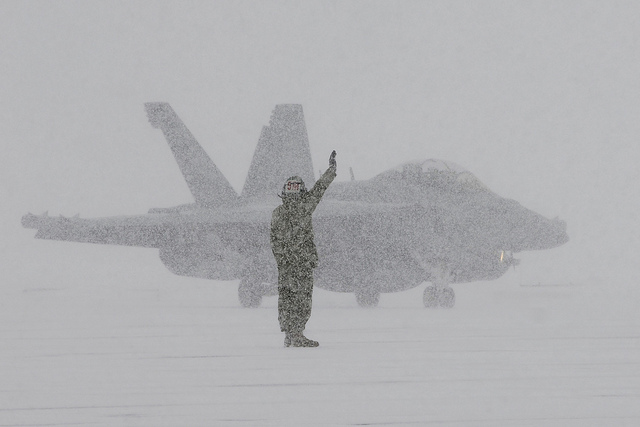 A groundcrew member from U.S. Navy Electronic Attack Squadron VAQ-132 signals to an Boeing EA-18G Growler as it returns from a flight during heavy snows at Naval Air Facility Misawa on Thursday. The VAQ-132 Scorpions are deployed in Misawa in support of the U.S. 7th Fleet. Based at Naval Air Station Whidbey Island in Oak Harbor, Wash., the Scorpions were first to fly the Growler, Boeing’s replacement for the venerable Northrop Grumman E-A-6B Prowler. The squadron’s EA-18Gs were first used in combat during Operation Odyssey Dawn by supporting efforts to enforce a United Nations no-fly-zone over Libya in early 2011.