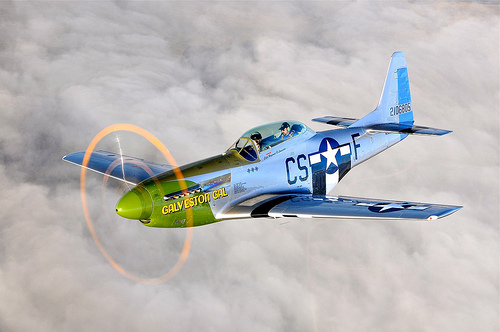 A World War II-era North American P-51 Mustang airplane owned by a Texas museum crashed in shallow water near Galveston on Wednesday, killing the two people on board, the U.S. Coast Guard said.

Petty Officer Steve Lehmann said the captain of a charter boat notified authorities after seeing the vintage P-51 Mustang, known as the “Galveston Gal,” crash in an area between Chocolate Bay and Galveston Bay.  He said the plane went down about 11:40 a.m. Wednesday in water some four feet deep. Emergency crews recovered the bodies after combing over Chocolate Bay for about an hour, KHOU.com reported.

Federal Aviation Administration spokesman Lynn Lunsford says the plane was operated by the Lone Star Flight Museum in Galveston. He says the pilot was not in contact with air-traffic controllers when it crashed.