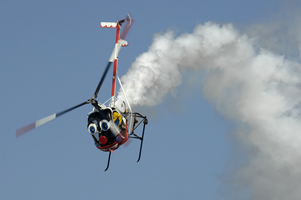 If you’ve frequented major American airshows in the last 25 years, chances are you’ve seen Otto The Helicopter, a 1985 Schweizer 300 with its canopy done over in clown face. Roger Buis is Otto’s second pilot; he and his wife Pauline bought the act in 1999.

Buis has a pocket full of helicopter and fixed-wing ratings, an A&P certificate and more than 18,500 hours total time, 12,000 of it in helicopters. He and Pauline are the recipients of the 2013 Art Scholl Memorial Showmanship Award from the International Council of Airshows (ICAS). When not traveling the airshow circuit with Otto, he is chief pilot for Pensacola, Fla.-based Heliworks, flying diverse missions from offshore transport and charter to movie filming and news gathering, power and pipeline patrol, firefighting and flight instruction.

During its daytime performance, Otto bobs up and down parallel to the crowd line, treating spectators to a series of quick vertical ascents and drops, tight pedal turns, steep banks, and lateral and backwards flight. The announcer “asks” Otto a question, and the helicopter “shakes its head” yes or no, much to the delight of everyone, particularly small children.

For the complete story by Mark Huber of AINonline, click here.